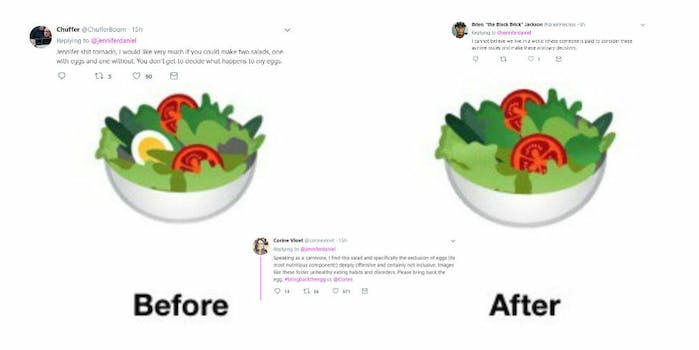 In a bid to be more inclusive, Google is stripping its salad emoji of extra calories and inviting vegans to give it a taste. Jennifer Daniel, a user experience manager for Google emoji, announced on Twitter on Wednesday that the company would remove the egg from its salad emoji.

“There’s big talk about inclusion and diversity at Google so if you need any evidence of Google is making this priority may I direct your attention to the [salad] emoji—we’ve removed the egg in Android P beta 2, making this a more inclusive vegan salad,” she said.

While we’re all for being inclusive, there’s no denying the new salad emoji doesn’t exactly look appetizing. Google has updated its food emoji in the past after some questionable culinary decisions, so let’s hope it at least throws some avocado or cucumber on top. We’d be buying from the menu of Apple’s emoji restaurant if we had to choose.

Others were even more critical of the changes, hitting out at Google, and specifically Daniel, for making adjustments that don’t align with their own preferences.

As a meat eater, this emoji isn’t very inclusive to me.

Excuse me i don't have legs, could you cut yours off so i can feel included?
That's how it works right?

Daniel backtracked from her original statement about why the changes were made, later claiming they were done to create an image more faithful to Unicode’s description: “A bowl of healthy salad, containing lettuce, tomato, and other salad items such as cucumber.” It did little to quell the criticism.

Omg you got to be kidding me! So now SALAD is also subject to diversity and SJW attacks?! Wtf!

So Google has changed its story. It seems this isn't about diversity and inclusion after all, but about 'unicode'. But just how does a divisive, nutritionally deficient, monocultural vegan-only salad help anybody? #bringbacktheegg @Yamapama @SvensTweet https://t.co/MV8TkNAVWX

The eggless salad is one of 157 changes coming to emoji on Android devices later this year. The list includes two gender-neutral emoji, a water gun to replace the pistol, and a red-headed character. Google is also turning its grasshopper emoji into a cricket, giving the turtle a more playful look, and cooking the bacon icon to a deep, delicious brown color.

The changes will be made to Android P, the upcoming mobile operating system expected to arrive on handsets later this summer. Google released the first beta for it last month after announcing its major features at the I/O developer conference. It’s now ready to jump into phase two of testing.

In its developer blog, Google announced Android P Beta 2, an update that includes the OS’s final APIs, latest system images, and updated developer tools. The Android P Beta 2 is available on select devices and will be rolled out to everyone in July or August.