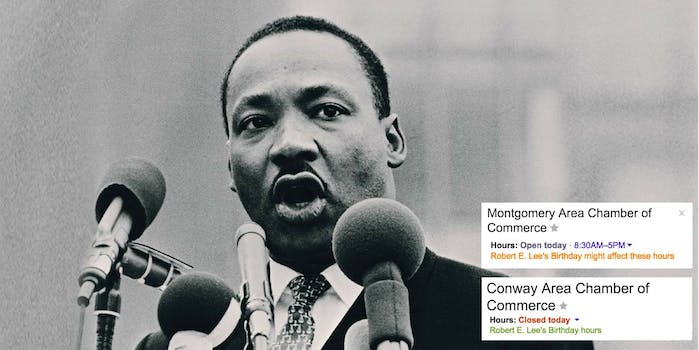 Why is Google Maps insisting that businesses are closed for Robert E. Lee’s birthday?

If you errands today, you might check with Google Maps to see if the establishment you’re wishing to patron has changed its hours in observance of the federal holiday Martin Luther King Jr. Day.

For people living in Alabama, Arkansas, and Mississippi, however, Google Maps has a completely different reason for why restaurants and businesses may be closed today: Robert E. Lee‘s birthday.

Because Arkansas observes #RobertELee day on #MLKDay, @Google assumes closings in the state are because of the Lee holiday. (h/t @amybhole) pic.twitter.com/s8H0Uk7rUr

Yes, while Google Maps lists that other establishments in the U.S. may have altered hours for the holiday commemorating King, the celebrated civil rights activist, the mapping service ironically credits closures in those three states to Lee, the commanding general of the Confederate Army during the Civil War. 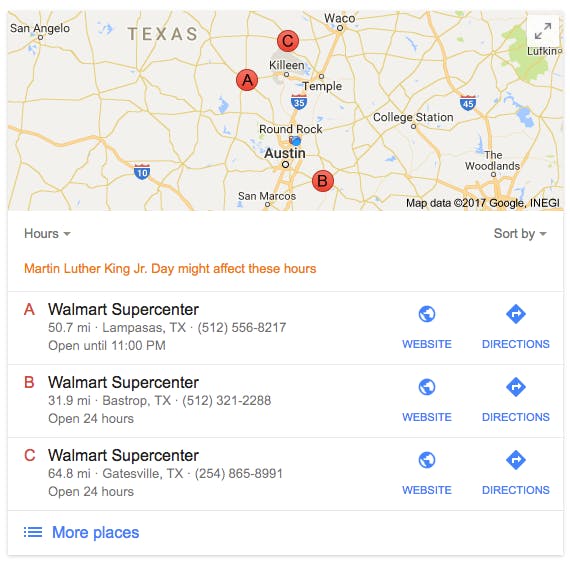 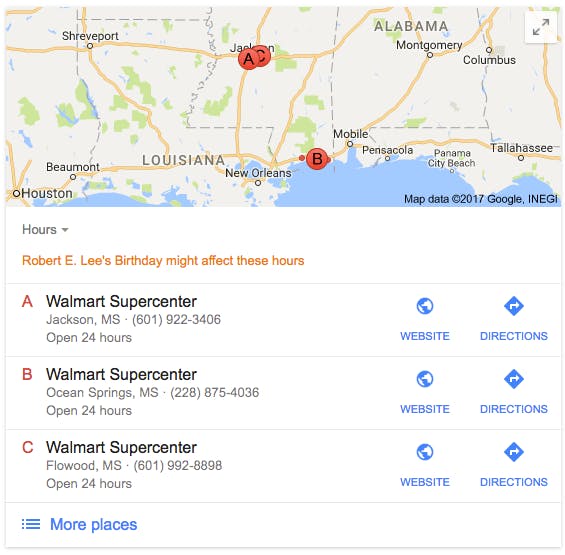 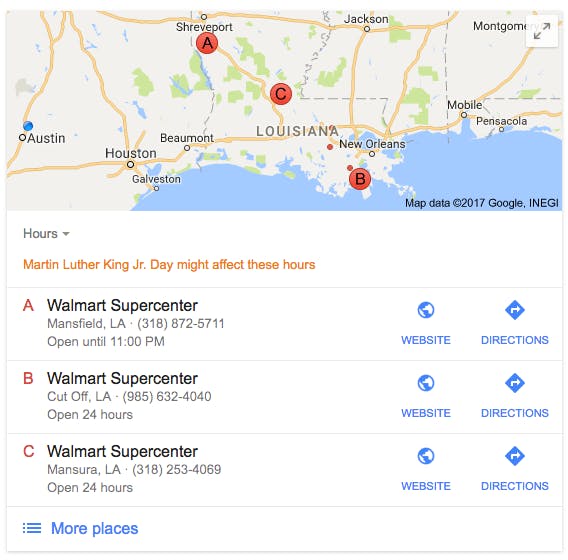 The perceived slight to the minister and civil rights champion occurs both online and through the Google Maps phone app. Several people have taken notice and tweeted their concerns to Google.

@Google shouldn't this say MLK Day? Who can look into this issue? pic.twitter.com/AFwCKgA4zb

@Google Why is Google maps recognizing Robert E Lee Day in the state of Alabama but Dr MLK in other states? pic.twitter.com/iOXrAOkpMO

Lois Horton, professor emeritus of history at George Mason University, told National Geographic that southern states against integration resisted seeing King as a hero—a sentiment still evidenced today by the commemoration of a Confederate leader on a day a majority of the country celebrates the advancement of civil rights.

“[King] was seen as an enemy of things that they believed in,” Horton told National Geographic. “It was difficult for them to then change to see him as someone who should be celebrated.”

Adena White, the director of communications for the chamber of commerce in Conway, Arkansas, told the Daily Dot she noticed Google’s “Lee” designation after seeing a few tweets pointing out the discrepancy.

Since the chamber is closed for MLK Day, White decided to check if she had the ability to change the chamber’s reason for closing.

“I was able to edit our holiday hours on Google My Business to ‘closed’ but could not edit the reason why,” White said via Twitter direct message. “It appears that state holidays take precedence over federal holidays.”

Other states similarly tiptoed around celebrating King in the past, with holidays like Civil Rights Day in New Hampshire, and Lee-Jackson-King Day in Virginia, a day also dedicated to Confederate General Stonewall Jackson, which was discontinued in 2000. South Carolina once required state employees to choose between MLK Day and three other Confederate holidays on which to receive a paid vacation—the state became the last to recognize the day as a paid federal holiday in 2000.

Arkansas Gov. Asa Hutchinson is in the process of removing Lee’s birthday from the holiday, though a similar effort failed two years prior.

My business regularly ships with my various local @TheUPSStore. That will change, after looking at their holiday hours. pic.twitter.com/yAmnfDeY6q

“I believe it could hurt businesses when Google only acknowledges the lesser-known, more-controversial state holiday over the federal holiday. I’ve seen two instances… where people took screen shots of a business’s hours to call attention to what they perceived was that business’s decision to honor Lee over King,” White said.

At least Google appears to be aware of the problem. A Google spokesperson provided the following statement to the Daily Dot, stating that it was a flaw of the maps feature itself that caused Lee’s birthday to trump MLK Day:

“The holiday hours feature lets people know when a business could be closed or its hours could be different due to a holiday. Unfortunately, in the three states where Robert E Lee’s birthday is recognized as well, the feature is not surfacing Martin Luther King Day as it should be. We apologize for any offense this may have caused. Our teams are working to fix this issue as quickly as possible.”

So far 2017 isn’t looking too great for Google, but hopefully the tech giant tightens up its gaffes heading into Black History Month.

Update 4:40pm CT, Jan. 16: A Google spokesperson tells the Daily Dot that holiday hours for Alabama, Arkansas, and Mississippi have been designated to include MLK Day.