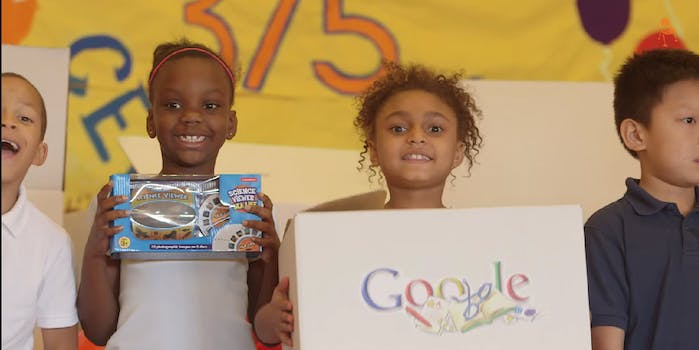 Google just funded all the classroom projects in L.A. and Boston

Earlier this week, Google surprised teachers in Los Angeles and Boston by fully funding all of their classroom projects on DonorsChoose.

Google partnered with the crowdfunding charity website, popular with underfunded schoolteachers trying to raise money for educational resources, as part of its ongoing spate of similar activities in other cities around the country. So far the Google fairy has visited San Francisco, Atlanta, Chicago, Washington, D.C., Seattle, Austin, and Kansas City, funding every classroom listed on the site in those locations.

The “flashfunds” included supplies and resources for 760 teachers in the Los Angeles Unified School District and the 75,000 students in their classrooms, as well as 120 schools and 225 classroom projects in Boston.

The Los Angeles funding initiative is one of Google’s biggest to date, with almost $1 million in donations. The surprise came with a district-wide celebration as Google awarded students with bird-watching binoculars, bilingual books, computers, and more. In Boston and Cambridge, the company donated $185,000 in resources to area schools, including new laptops, projectors, cameras, and magnetic writeboards.

Google also posted a message on every funded project to let teachers know they were a part of the surprise.

In addition to its project funding initiatives, Google has also collaborated with DonorsChoose on a $5 million program aimed at launching Advanced Placement courses in Science, Math, Engineering, and Technology within high-poverty schools.