What social network is the most targeted for removal from search results? We bet you can guess.

Google on Wednesday released new information about the search results it has been asked to delete under a European privacy right.

The company’s new transparency report, which breaks down removals under Europe’s so-called “right to be forgotten” principle, reveals the most common targets of removal requests. Surprisingly, they’re not unflattering news articles, but rather social-media profiles.

Google deleted the most search results from Facebook (10,220 URLs). While the site’s privacy settings change frequently, Facebook is one of the few major sites that offers users the option of delisting their profiles from search engines.

Other sites that prompt the most censorship requests include, in order, Google Groups, Google+, YouTube, Twitter, and the London-based social dating service Badoo. One of the other most-scrubbed domains is wherevent.com, which republishes publicly available information to compile general directories of people. It also scrapes Facebook for public events.

The ten most-targeted domains accounted for nine percent of all deletion requests. 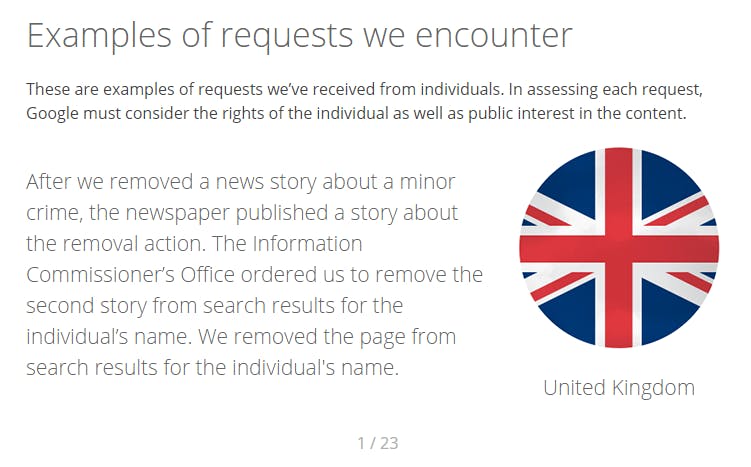 Google provided examples of the right-to-be-forgotten requests it received.

Since Google began complying with a European court order upholding the right to be forgotten on May 29, 2014, Europeans have requested the deletion from search results of more than 1.2 million URLs.

Google said in its report that it had only removed 42 percent of the search results targeted for deletion. It also said that, while it honors seemingly silly requests to block results for social-media accounts, it pushes back strongly against certain requests from public figures.