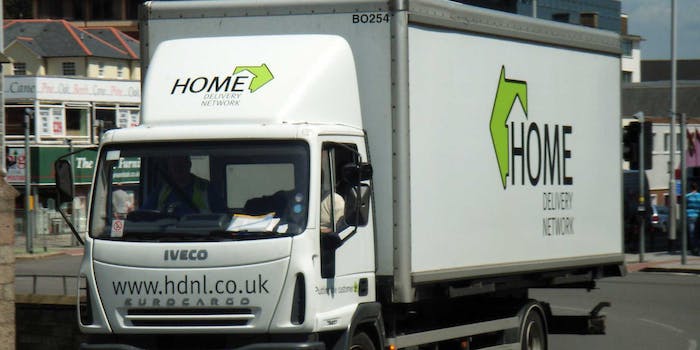 Photo via Graham Richardson/Flickr (CC BY 2.0)

Imagine if he didn't work for Google.

Silicon Valley is often (and rightfully) associated with excess, but one Google employee is opting for a much more minimalist lifestyle by living out of a truck.

The 23-year-old software engineer, identified by Business Insider only as Brandon, decided to live in the back of a box truck after interning for the search company in 2014. During his summer stay, he found the cheapest housing options provided on campus would cost about $2,000 a month.

“Once I realized I was only ever at my stupidly expensive apartment to sleep, I started hatching my plan,” he wrote in a post on the blog that he keeps about his experience.

The truck, a 16-foot 2006 Ford with 157,000 miles on it, cost Brandon $10,000 up front, which he paid with his signing bonus. The vehicle comes with a single recurring cost: $121 a month for insurance. There are no utilities to pay and Google covers his phone bill.

As of Oct. 21, after about five months of living in the truck, Brandon has reached his break-even point—the point at which his monthly savings living in the truck has surpassed the cost of the truck and insurance. He expects he’ll have his $22,434 of student loan debt paid off in its entirety within the next six months.

Brandon’s choice of living out of a box truck certainly seems like an odd one considering the lifestyle generally associated with tech companies in Silicon Valley, but it’s not as uncommon as it would seem; software engineer Katharine Patterson recently detailed her decision to live out of her van instead of paying rent, while a group of tech entrepreneurs decided to live in an RV together.

It’s worth noting that the unconventional choice of living quarters is still exactly that for people working high-paying jobs: a choice.

It’s afforded to Brandon and others because they work for companies that pay high wages, cover some expenses, provide benefits, and have sprawling campuses that offer access to showers, food, and gyms.

It’s assuredly not a choice for most people in the Bay Area who don’t work at startups or massive tech firms; the nearby city of Paulo Alto, California, for instance, reversed a ban on people sleeping in cars in 2013 as homelessness rates in the area and neighboring cities increase.

Even those working for wealthy companies can have difficulties just making ends meet if they aren’t in a coveted role: the San Francisco Chronicle profiled 53-year-old Scott Peebles, an employee of Apple who drives one of the buses that transports the company’s employees from San Francisco to Cupertino, California. He lives out of a 1997 Dodge Caravan and sleeps on an inflatable mattress in the back of the vehicle.

According to Zillow, the median rent price in the Mountain View area, where Google is located, is $3,950—much in part due to the companies like the one Brandon works for. People can choose to live in surrounding areas but, as Brandon notes in his blog, “Even sharing bedrooms, rent in the Bay area is going to cost at least $1,000 a month.”  That’s before factoring in utilities and the additional costs associated with commuting to work.

A report issued this year by the National Low Income Housing Coalition found a person would need to make more than $31 an hour to afford a one-bedroom apartment and nearly $40 an hour for a two-bedroom in the San Francisco area.

Living in a box truck is an uncommon lifestyle to choose for an engineer at one of the biggest companies in the world, but it’s still a luxury to have the ability to make that choice. It’s one that still isn’t viable to most of the people making $12.25 an hour, the minimum wage in San Francisco.