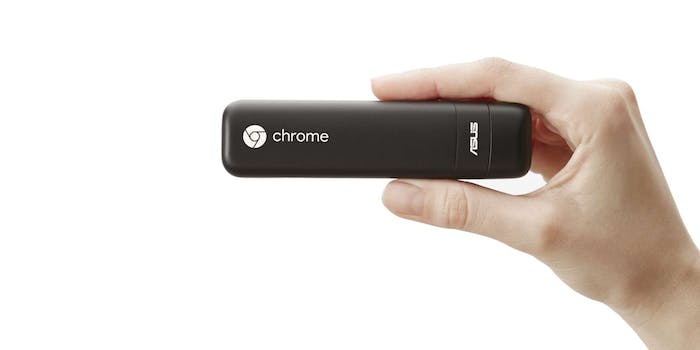 For $85, you can get a fully functional Chrome OS computer on a stick

A golden opportunity to get Chrome.

Google’s Chrome OS is coming to a monitor near you. The search giant has teamed up with Asus to produce a fully-functioning PC that lives on a stick about the size of a flash drive.

The Chromebit plugs into any display with an HDMI port and turns it into an all-in-one ChromeOS computer. Packed into the 2.6 ounce stick is a quad-core Rockchip ARM processor, along with 16GB of onboard storage and 2GB of RAM. There is also a built-in USB port so you can expand memory or plug in accessories.

With ChromeOS running, users will be able to access any of the apps in the Chrome Web store. That includes the likes of Netflix, Spotify, Google Docs, and everything in between.

The OS-on-a-stick, which resembles Google’s first go at the Chromecast, presents considerable potential for a portable and affordable computer on the go, thought it’s not the first operating system to get the plug-and-play treatment; earlier this year, Microsoft unveiled the Quanta Compute Plug which runs full Windows 10. Intel also built its own portable computer drive with the Compute Stick.

Chromebit became available starting on Tuesday, and is available at launch for $85. The device will retail from Amazon, Fry’s and Newegg and is available in the United Kingdom, Australia, New Zealand, Canada, Denmark, Finland, Japan,  Taiwan, Norway, Spain, and Sweden.