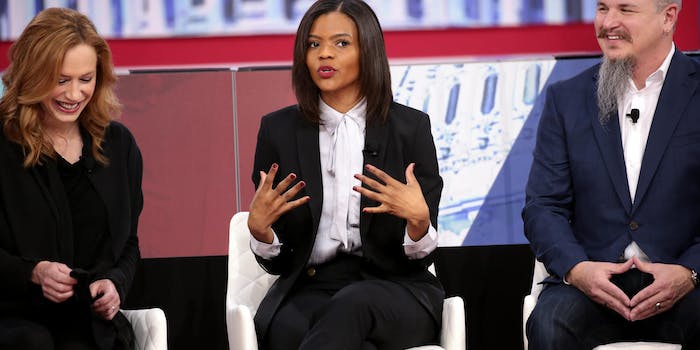 She started the campaign after the owner's texts calling George Floyd a 'thug' and Black Lives Matter protesters 'idiots' were made public.

The conservative pundit recently created a campaign for Michael Dykes’ restaurant and bar in Alabama, Parkside Cafe, after he was hit with backlash for calling George Floyd a “thug” and Black Lives Matter protesters “idiots” in text messages that were made public. Owens has also made disparaging remarks about Floyd, who was killed by a police officer, and the subsequent protests sparked by his death.

She said in a video that she did not “support George Floyd and the media’s depiction of him as a martyr for Black America.”

Owens, according to Newsweek, also alleged that Floyd was high when he died and called him a “violent criminal.”

“For whatever reason, it has become fashionable over the last five or six years for us to turn criminals into heroes overnight. It is something I find despicable. George Floyd was not an amazing person. George Floyd is being upheld as an amazing human being,” she said.

A GoFundMe statement claims Owens violated its terms of service for a “repeated pattern of inflammatory statements that spread hate, discrimination, intolerance and falsehoods against the black community at a time of profound national crisis.”

Owens reportedly raised more than $200,000 before GoFundMe yanked it.

GoFundMe is still going to give the funds to the café as it has apologized for Dykes’ comments. “Furthermore, the Parkside Cafe has clearly condemned the comments that initially led to this campaign,” the GoFundMe statement reads.

Owens via Twitter called GoFundMe’s suspension “a blatant form of discrimination” and is seemingly claiming the ban simply happened because she was attempting to raise money for a conservative business and business owner.

“At their discretion, they deemed that funds raised for a conservative business constitutes ‘intolerance,'” she wrote. “While I am glad they will give the funds raised this far to the cafe to the owner, I am angry that such a blatant form of discrimination is acceptable by @gofundme. There was NOTHING intolerant or violent about raising funds to help a conservative business owner.”

The suspension comes after Owens was temporarily booted from Twitter in May for spreading coronavirus misinformation.

On the flip side, the memorial fund for Floyd has raised $13 million, setting the record for the most individual donations a fundraiser has received in the process.