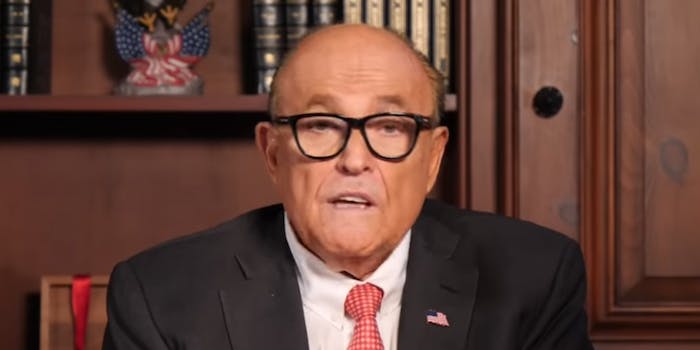 An attorney who specializes in sexual privacy violations explains why such claims are wrong.

Conservatives jumped to the defense of Rudy Giuliani after it was revealed on Wednesday that the former New York City mayor is featured in a possibly compromising scene in the upcoming Borat film.

Giuliani, who is now the personal lawyer to President Donald Trump, was unknowingly filmed laying on a bed with his hands in his pants in front of a woman he believed was a Russian journalist.

At the end of the scene, Borat, played by actor and comedian Sacha Baron Cohen, runs in the room and informs Giuliani that the woman is only 15 years old. The female, played by actress Maria Bakalova, is actually 24 years old.

Giuliani has since defended his actions by claiming that he only undid his pants in an effort to tuck back in his shirt.

“The Borat video is a complete fabrication,” Giuliani said. “I was tucking in my shirt after taking off the recording equipment.”

News of the encounter quickly spread online and was met largely with disgust, but several prominent conservatives argued that Giuliani was the true victim.

The claim was also reiterated by Mike Cernovich, a Pizzagate conspiracy theorist and far-right commentator.

New York’s law states that the malicious publication or sharing of an intimate image of a person without their consent is illegal and punishable by up to one year in jail and a $1,000 fine.

Both Posobiec and Cernovich also claimed that such material violated Twitter’s non-consensual nudity policy, although no nudity is actually featured in the scene.

The Daily Dot reached out to Twitter to ask whether the images of Giuliani violated their policy and was told by a spokesperson that they did not.

Carrie Goldberg, a New York attorney who specializes in sexual privacy violations, also explained to the Daily Dot why Cernovich and Posobiec’s claims are patently false.

Goldberg further noted that the law doesn’t apply to situations where there is no reasonable expectation of privacy or when the nudity happens publicly.

“While we believe that celebrities and public figures should be entitled to the same protections under sexual privacy laws that are available to [private citizens], nobody—not celebrities or non-celebrities—would be protected for the behavior alleged.”

The claims from Posobiec and Cernovich also fall short given that Giuliani himself has alleged that no sexual activity had taken place.

“So saying there are images of nudity or sex from this event contradicts the so-called victim’s own statements,” Goldberg said. “Secondly, this happened within the context of a consensually filmed interview.”

The scene, featured in Borat Subsequent Moviefilm, will be publicly released on Friday on Amazon Prime.