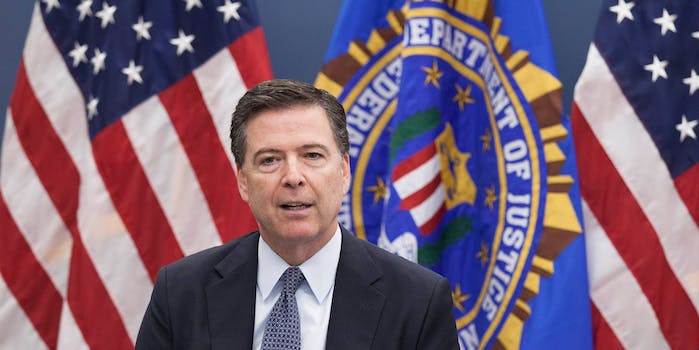 'The last thing I wanted was to have this become political propaganda.'

“The FBI asked for me to speak to the media as little as possible. I have tried to stay quiet, but Comey has upset me,” the teen, whose identity has not been publicly revealed, told BuzzFeed News. “The last thing that I wanted was to have this become political propaganda.”

Last Friday, Comey sent a letter informing members of Congress that the FBI had found new emails relating to Clinton’s use of a private email server while she was secretary of state. Those emails were discovered on a laptop owned by Weiner, whose wife, Huma Abedin, is a long-time Clinton adviser.

Weiner, who has faced a string of scandals regarding his penchant for sending sexually explicit messages to women he met online, is currently under investigation regarding revelations that he did so with a minor.

The girl told BuzzFeed she learned about her case’s involvement with the presidential campaign through the media, receiving a call from a reporter asking about Comey’s letter hours after completing a lengthy interview with FBI agents.

“[I’m] angry that the local folks had interviewed my daughter for six hours that same day about intimate details from her previous interactions with a pervert and then released the story of Weiner’s server before we could drive home from the site where she was interviewed,” said the girl’s father, who noted that it appeared as if not even the FBI agents who conducted the interview were aware of Comey’s actions.

The girl told BuzzFeed that she is a “big fan” of Clinton, the Democratic presidential nominee, and is considering moving to Germany if Trump is elected.

She’s not the only person to have criticized Comey’s handling of the discovery of the emails on Weiner’s computer—which the FBI did not know the contents of, nor did it even have a warrant to read, at the time the FBI director sent the letter to Congress. Three former attorneys general—Alberto Gonzales, Eric Holder, and Michael Mukasey—all blasted Comey’s handling of the issue as highly improper.