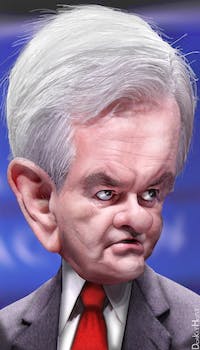 What tweets inside Newt Gingrich’s mind?

Whether you're a fan or a foe, you'll find something to like about @GingrichIdeas.

Have you ever seen a politician on TV and wondered, “What is he really thinking?”

A new Twitter parody account has granted that very wish for a Republican presidential contender in the news now.

Over the last month, @GingrichIdeas has been tweeting out hilarious messages on behalf of former House speaker Newt Gingrich. The tweets are filled with politically inspired non sequiturs and topical references. So far the account has collected an impressive 7,000 followers.

That’s an impressive figure: Even at the height of Herman Cain’s campaign, his best-known parody Twitter account had only collected 3,500 followers combined.

Here’s a collection of some of @GingrichIdeas’s funniest tweets.