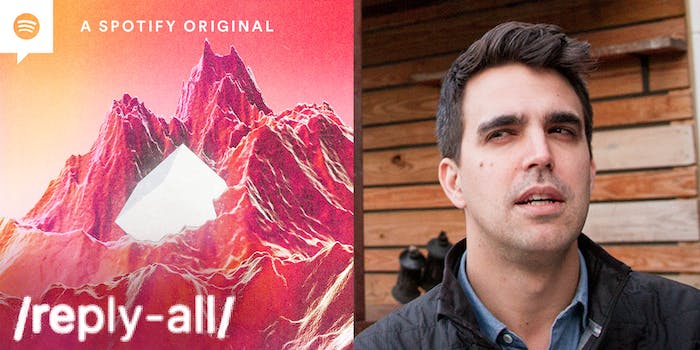 Like others before it, this reckoning was launched on Twitter. This Twitter thread then unleashed a torrent of accusations of institutional racism at the company that produces some of the most popular podcasts in the country. As a result, a host and a senior reporter at the podcast apologized and took leaves of absence.

On Tuesday, Eric Eddings, co-host of For Colored Nerds and The Nod Show, shared his story about the “toxic dynamic at Gimlet [Media],” where he formerly worked. He tweeted that the toxicity was fostered by a senior reporter and the host of Gimlet’s Reply All, Sruthi Pinnamaneni and PJ Vogt, respectively.

Eddings says that the pair actively worked against efforts to diversify the company and attempted to derail unionization, which nevertheless ultimately succeeded. Multiple former colleagues of the two, including his co-host, Brittany Luse, subsequently corroborated Eddings. Both Pinnamaneni and Vogt have since apologized, and are taking leave from the show.

“I should have reflected on what it meant to not be on the same side of a movement largely led by young producers of color at my company,” Vogt said in a statement posted on Twitter. “…I’m sorry to everyone I’ve disappointed.”

Pinnamaneni’s apology, also posted on Twitter, read in part, “My conduct around the diversity and union organization efforts at Gimlet was ill-informed, ignorant, and hurtful. [,,,] I apologize to everyone I have let down.”

The reckoning was inspired by Reply All’s much-anticipated series dissecting a similar controversy at Bon Appétit, Eddings wrote. Last year, a scandal nearly engulfed the storied food magazine after damning reports surfaced of a toxic work environment where people of color were treated as second class, Insider reports. Eddings said that listening to the first of the series made him feel “gaslit.” It also inspired him to share his story.

He said that he repeatedly tried to get Vogt to join efforts to increase diversity at the company, but was brushed off every time. When they launched the drive to unionize, he wrote, “many POC’s felt that it was their last chance at creating an environment within Gimlet where they could succeed.”

Vogt and Pinnanameni, along with Alex Goldman, a host/producer of Reply All, fought unionization every step of the way. Their resistance dealt a significant blow to the effort, as Reply All is the biggest podcast at the company and wields the most sway with management. Eddings said Vogt once relayed to him that Pinnanameni called him “a piece of shit” for trying to unionize their company.

“The team led by PJ, Sruthi, and Alex G used their weight as a cudgel against our efforts at voluntary recognition,” Eddings wrote. “Sruthi personally held an Anti-union meeting, trying to rally people against it.”

“The union drive was weakened by ultimately succeeded,” he said in a subsequent tweet. He also said that Goldman is now on the bargaining committee and he’s also been told that Goldman has become a staunch ally.

Much like what happened at Bon Appétit, Eddings’ account inspired many of his current and former colleagues to share their own, similar stories or confirm his.

“The amount of trauma I witnessed and experienced at gimlet as a result of these relationships of power and race is frankly incalculable,” tweeted Gabe Lozada.

While the focus is on Gimlet Media at present, as many pointed out, this issue is by no means confined to one company. The entire media industry has begun grappling with internal problems with diversity and institutional racism in recent years.

Yesterday it was Bon Appétit; today it’s Gimlet Media. Tomorrow it will likely be another.