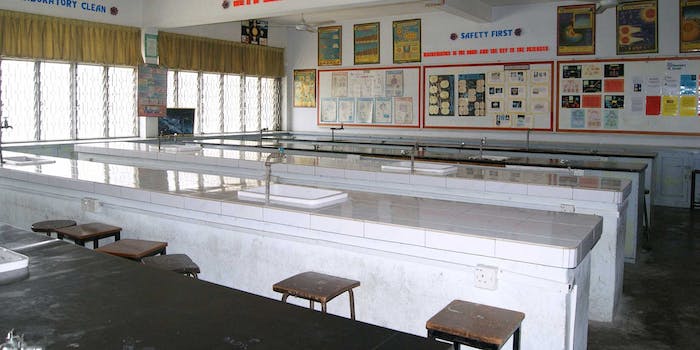 Separation of church and... umm... what's that other thing?

When Suzanne Young picked her 14-year old son from school on Wednesday, he handed her his 9th grade biology textbook. “You’re going to want to read this,” he said, pointing to a sticker on the inside cover.

Young—the Gilbert, Arizona-based bestselling author of the young adult thriller The Program—was shocked by what she saw. She took a photo of the sticker and posted it to Twitter, where it quickly went viral. 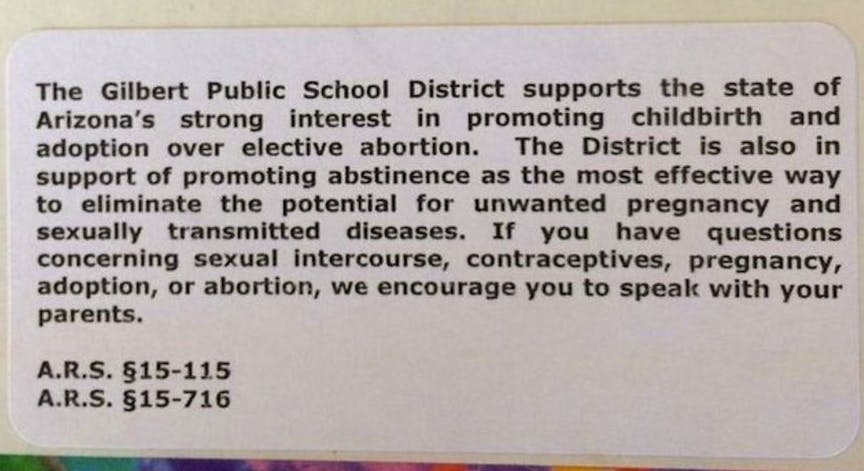 “He loves his school, but he was really uncomfortable with the sticker,” Young told the Daily Dot. “He said he’d rather learn all of the facts and form his own opinion. He doesn’t need the school district to take a position on the issue.

“He also thinks abstinence-only education is irresponsible. He said, ‘The thing is, we’re eventually, in life, going to have sex. So why not prepare us and educate us with facts?’”

Young’s son was told that refusing to put the sticker on the book would trigger a meeting with an administrator from Gilbert Public Schools. Students who didn’t bring their science books to class to add the sticker were similarly threatened.

The sticker is the result of language enacted by Arizona lawmakers in 2012 that states:

In view of the state’s strong interest in promoting childbirth and adoption over elective abortion, no school district or charter school in this state may allow any presentation during instructional time or furnish any materials to pupils as part of any instruction that does not give preference, encouragement and support to childbirth and adoption as preferred options to elective abortion.

Last year, a battle broke out between religious conservatives on Gilbert’s school board and its more progressive members over how the rule would apply to biology textbooks. At one point, a proposal was put forward to have the pages of biology texts that covered contraception physically ripped out of the books; however, that idea was scrapped in favor of stickers, which was viewed as a compromise. Also, there was some concern that ripping the offending pages out of the books would have violated copyright law.

At issue were books, such as Campbell Biology: Concepts & Connections (Seventh Edition), that some school board members believed didn’t comport with the pro-abstinence, anti-abortion standards imposed by the 2012 law. The push, made by the conservative group Alliance Defending Freedom, was against a section of the book that talked about contraceptives, abortion, and a description of how human embryos develop in utero.

A spokesperson for the district told Phoenix New Times that the stickers will be put in all biology textbooks used by freshman, sophomore, and junior students.

As a former teacher and author of fiction aimed a young adults, Young was especially upset by district’s sticker policy. “One of my many problems with this sticker is the fact that it’s on a science textbook,” she said. “The public school district has taken an educational text and used it to teach morality. It assumes that all students have supportive parents to talk to and shuts down further discussion. It shames and isolates girls before supplying them with information and biological facts.”

“Ultimately, parents and guardians should talk to their students about their beliefs and values,” she continued, “it shouldn’t come from the public school system.”

Gilbert Superintendent Dr. Christina Kishmoto told ABC 15 that she worked closely with the school board on striking a compromise. “The board and I have full confidence in our teachers; and because we trust the way our teachers instruct, we agreed that the stickers on the back cover are the best course of action,” she said in a statement. “We are pleased with the collaboration and completion of this matter.”

As Mic notes, fewer than half of states in the U.S. have rules mandating that public schools teach sexual education and, according to the study from the Guttmacher Institute, only “13 states require that the instruction be medically accurate.”

Photo by WHZhang/Wikimedia Commons (CC BY 3.0)