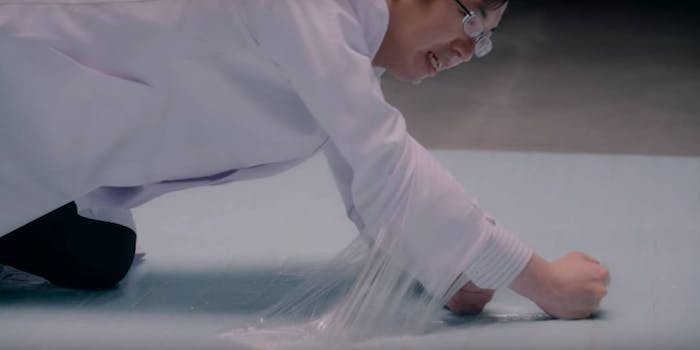 Earth Chemical wanted to know if they could build a trap big enough to catch mutant roaches, so they tested it on people.

When you have roaches, a glue trap is a low-tech solution to an infuriating problem. These traps are capable of stopping the world’s most annoying pest, but what if we weren’t the one’s laying down the glue mats. How would human beings fair against a person sized roach trap? Thanks to Japan we no longer have to wonder.

Earth Chemical wanted to showcase just how powerful their glue traps where. Under the guise of developing future roach killing technology for the inevitable day when giant roaches roam the earth they built a bigger roach trap. Then they decided to test it on people.

Realizing roaches will come in many different monstrous sizes the crew at Earth Chemical tested their giant trap against a scientist, a track runner, and a Sumo wrestler. The result is an infomercial that’s part David Cronenberg and part MythBusters. You can watch the product test here, then scroll down to watch their making of video. It’s worth it just to see how they finally unstuck these poor souls from their otherwise sticky doom.