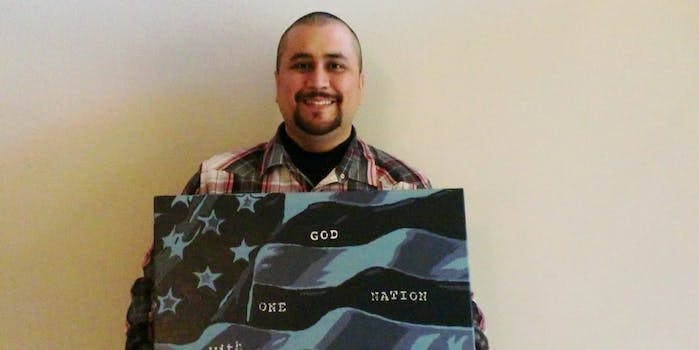 'To this date I have not, nor will I ever tweet any image of the Fultons or Martins.'

Ever since the Trayvon Martin shooting and the subsequent trial in which he was acquitted of murdering the 17-year-old, George Zimmerman has refused to keep a low profile, selling his Confederate flag art and being arrested for alleged aggravated assault.

He’s also active on Twitter, and that led to his latest controversy in which Zimmerman’s account last week retweeted a photo of Martin after he had been shot to death.

On Monday, though, Zimmerman denied on Twitter that he meant to do what he did. Here was his statement.

Well, it’s not so hard to believe that Zimmerman would intentionally troll his detractors.

And that’s just from his Twitter feed in the past couple of weeks. Twitter did not immediately verify whether Zimmerman’s alibi for the retweet—that the original poster of the image “voluntarily selected to have all of his Twitter images flagged as potentially sensitive,” and that the image of the body was blocked on Zimmerman’s personal feed—was feasible or common.

Update 11:00pm CT, Oct. 5: A Twitter spokesperson tells the Daily Dot that Zimmerman’s explanation is possible within its platform.