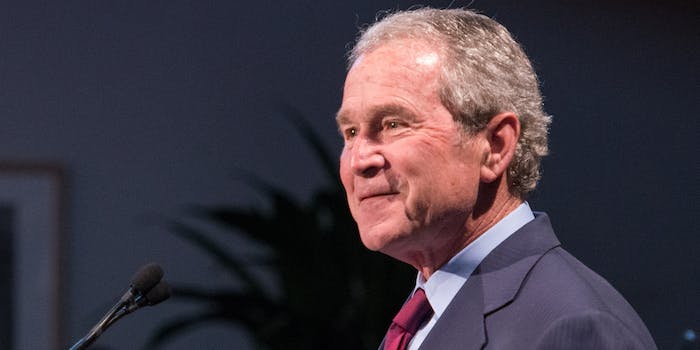 The former president also charged for the use of a private jet to the event.

Former President George W. Bush charged a veterans’ group $100,000 to speak at an event for service members who had losts limbs in the wars in Iraq and Afghanistan.

Bush also billed the group, the Texas-based Helping a Hero charity, $20,000 for the use of a private jet to attend the event. Laura Bush, the former first lady, was paid $50,000 to speak to the group last year.

Meredith Iler, the former chairwoman of Helping a Hero, justified the fee by saying that Bush’s presence helped bring in more donations. She also said that the $100,000 figure represented a more-than-fifty-percent reduction in his typical rate.

Contrary to Iler’s claim, Politico found that Bush typically charged $100,000 to $175,000 during the time period in which he spoke at the Helping a Hero event.

Donald Trump, who is running for the 2016 Republican presidential nomination against Bush’s younger brother Jeb, wasted no time blasting the 43rd president.

A Helping a Hero board member called the fee a “slap in the face” in a statement to ABC.”

“For him to be paid to raise money for veterans that were wounded in combat under his orders, I don’t think that’s right,” said Eddie Wright, a former Marine. Wright lost both of his hands in a 2004 rocket attack in Iraq.

Former President Bill Clinton, whose wife is running in 2016, has also been criticized for his lucrative post-presidency speaking career, but a Clinton spokesperson told ABC that the former Democratic president has never charged a speaking fee for addressing a veterans group.

Photo via LBJ Foundation/Flickr (CC BY 2.0)