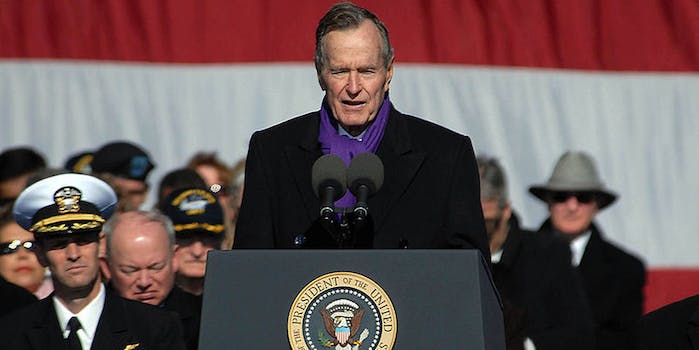 No wonder Donald Trump rails against the political elite—they don’t seem to like him very much.

As first reported by Politico, Townsend posted a photo of her and 92-year-old Bush with a caption stating, “The President told me he’s voting for Hillary!” Townsend, daughter of the late Robert F. Kennedy and a former Maryland lieutenant governor, further confirmed Bush’s alleged support for Clinton in a statement to Politico.

Jim McGrath, a spokesperson for Bush, did not confirm that the former president plans to vote for Clinton, nor did he deny it. “The vote President Bush will cast as a private citizen in some 50 days will be just that: a private vote cast in some 50 days. He is not commenting on the presidential race in the interim,” McGrath said.

While Clinton’s lead over Trump has narrowed to one point—down from a seven-point lead in August—the real estate mogul and former reality TV star remains unpopular among longtime Republican politicians and officials, more than 100 of whom have publicly denounced the Republican presidential nominee.

In August, 50 Republican national security officials, including many who served under former President George W. Bush, the elder Bush’s son, denounced Trump as a threat to United States national security. And hacked emails stolen from retired four-star General Colin Powell, who served as secretary of state under George W. Bush, revealed earlier this month that Powell sees Trump as a “national disgrace.”

If the senior Bush does plan to vote Clinton in November, the decision may be a personal one. Bush’s son former Florida Gov. Jeb Bush, who many assumed would become the 2016 Republican nominee, fell to Trump in the GOP primaries after the businessman labeled him “low energy”—an attack that Trump supporters have since applied to virtually anyone they oppose.

Now, it seems, they’ll have to add another former president to that list.