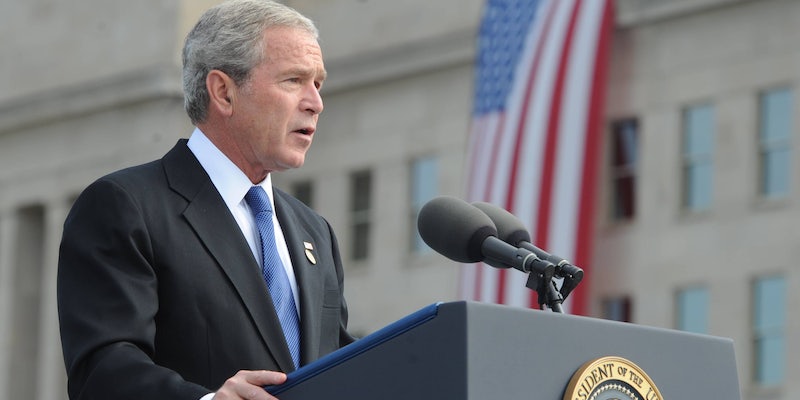 Photo via The U.S. Army/Flickr

'Power can be very addictive, and it can be corrosive.'

In a rare interview, former President George W. Bush underlined the need for an investigation into White House connections to Russia, warned against extreme immigration policy, and defended the media as essential in holding the government to account.

Appearing on NBC’s Today show on Monday for an interview with Matt Lauer, Bush reflected on the current state of politics and President Donald Trump’s first weeks in office.

“I consider the media to be indispensable to democracy,” Bush remarked, reflecting on the role of journalists who are constantly criticized by Trump. “The job’s a tough job… Now there’s all kinds of information being bombarded out, and people can say things anonymously. It’s just a different world.”

The comments follow an escalating and adverse approach that the White House has adopted to the press, felt strongly on Friday when it blocked a select group of respected news organizations from attending a press briefing.

The New York Times, BBC, CNN, BuzzFeed News, and Politico were all targeted for exclusion and have all, at one stage or another, been labeled “fake news” or “dishonest” by Trump. Appearing at the Conservative Political Action Conference (CPAC) on Friday, Trump repeated a serious charge at the mainstream media, calling it the “enemy of the American people.”

That’s not the opinion of fellow Republican and predecessor Bush, however.

“I consider the media to be indispensable to democracy. That we need the media to hold people like me to account. I mean, power can be very addictive and it can be corrosive,” Bush said. “And it’s important for the media to call to account people who abuse their power, whether it be here or elsewhere.”

Bush also said that he believed an investigation may be necessary to establish whether there were connections between Trump’s team and Russia’s government. Federal investigators are currently looking into contact between Trump’s campaign and Moscow.

“I think we all need answers… I’m not sure the right avenue to take. I am sure, though, that that question needs to be answered.”