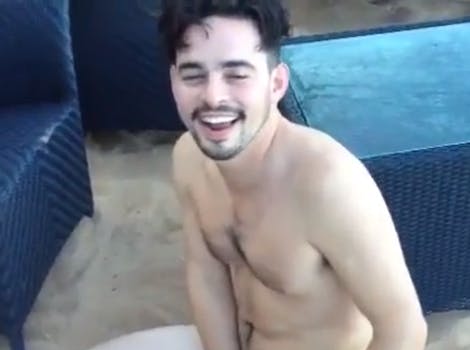 JESS3 lost most of its clients and almost all of its staff after its CEO tweeted this video.

Here’s a lesson for startup entrepreneurs: Don’t post footage of your wasted and naked friends to social media, especially if you’re in business together.

Back in February, Jesse Thomas—founder and CEO of interactive agency JESS3—partook in Geeks on a Plane, a worldwide event where tech types “travel by planes, trains, and automobiles to the most exciting international startup scenes.” Also on this trip was Matt Monahan, CEO of a company called AlphaBoost with business ties to JESS3.

At one point during trip, while in India’s Surya Samudra beach resort, Thomas and Monahan got drunk together. This devolved into Monahan getting so soused that he ended up naked and ranting. Instead of helping his pal out, Thomas recorded the incident (NSFW content) and uploaded the clip to his company’s Twitter feed.

“What do you think of India?” he asks in the video.

“Dude… I think, like, we should all be friends,” responds Monahan, who’s near blacked out and sitting on the ground while holding his hand over his crotch. He then tells Thomas to turn off the camera, but the JESS3 CEO keeps rolling. At one point, Thomas taunts Monahan for being less than adequate as the latter tries to get up.

“If you’re gonna get naked you gotta have a big ass dick!”

The tweets and video were subsequently removed, but not before Gawker posted them on its site. The episode couldn’t have happened at a worse time for Monahan, who purportedly was trying to sell his company around the same time.

The company lost a multitude of top executives back in March because of the aforementioned antics. So many people jumped ship—for this and reasons pertaining to financial mismanagement—that there’s no one left.

“Everyone else has walked out except for JESS3’s CPA, who has given notice but is still on board for the interim” an anonymous former employee told ValleyWag.

Even worse, JESS3 also shedded the very people that pay them.

“[We] lost most major clients over the India incident,” another ex-worker told the Gawker media publication. That person didn’t disclose which companies ended business ties with JESS3, but past big-name clients included Facebook Stories, Microsoft, and Google.