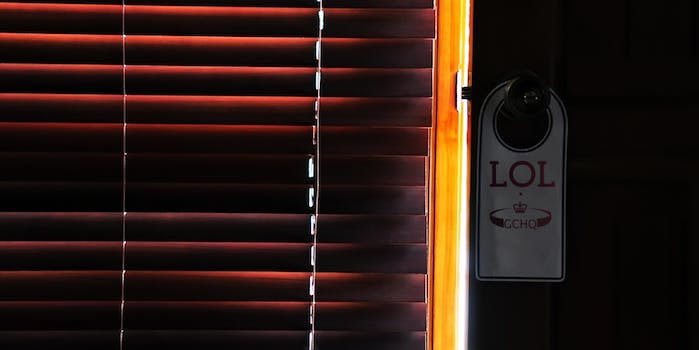 It’s one thing for a highly advanced, secretive government agency to monitor your Internet activity, email archives, and phone records.

But the U.K.’s Government Communication Headquarters, the counterpart to the U.S.’s National Security Agency, may have taken it too far: It has an entire program devoted to monitoring hotel reservations.

Based on slides leaked by former NSA contractor Edward Snowden, German newspaper Der Spiegel has published evidence of a program called “Royal Concierge,” which searches for worldwide hotel reservation emails  by tapping into GCHQ‘s massive network. The process is neatly summed up by this text box, included in one of the GCHQ’s presentation slides.

Though British intelligence chiefs recently proclaimed that the GCHQ’s massive online network is mostly used to stop terrorists and pedophiles, Royal Concierge is primarily concerned with tracking diplomats. The program automatically looks for reservation emails to .gov addresses and sends alerts to GCHQ analysts. According to Der Spiegel, it’s got a very specific purpose: to enable the “technical operations community” to pbug or otherwise prepare a room for more thorough intellegince-gathering activities.

It’s also the most oddly specific spy program yet revealed by Snowden.  “[C]an we influence the hotel choice? Can we cancel their visit?” one slide asks. Another notes a possible extension of the program, like tracking “favourite” hotels and car hiring practices.

At least 350 hotels are monitored under the program, Der Spiegel reported, according to other Royal Concierge slides the newspaper hasn’t released. The program was first tested in 2010. The slides don’t refer to any specific hotels, but they do indicate the program was not confined to British soil, stretching at least as far as Zurich and Singapore.