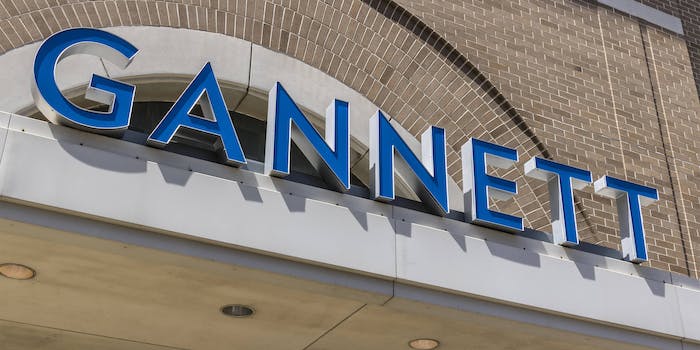 The Daily Dot obtained the company-wide email announcing the austerity measures. It includes a four-page memo of “Furlough FAQs.”

The email begins with praise for the “incredible work” of its newsrooms during the pandemic, and notes the support of its readership.

“Our strong audience and subscriber response this month show how much people rely on our news and information to make key, critical decisions that impact themselves and their loved ones,” it states.

Then it pivots, noting the challenges and uncertainty that coronavirus has wreaked on the economy, as well as its impact on Gannett’s revenue.

Finally, three paragraphs in, it drops the hammer.

“To meet this unprecedented challenge, we are instituting a series of immediate cost reductions, including a furlough program in April, May, and June across our division.

“We do not take this action lightly; we know furloughs cause hardship. All of Gannett’s divisions are approaching this challenge differently, but after careful consideration of other options, we felt this was the best approach for our team.”

Under the plan, employees who make more than $38,000 may be furloughed one week per month without pay for April, May and June. Senior leadership won’t be furloughed, but have agreed to take commensurate pay cuts of 25 percent.

According to Comparably, top Gannett executives earn an average of $225,000 annually. CEO Mike Reed has reportedly elected to receive no salary during this period.

The email also asks unions to support the measures.

Coronavirus has put intense pressure on newsrooms in an industry that has already been stripped of resources and staff in recent years.

Gannett itself has implemented numerous layoffs even as it acquires more properties, most notably its merger with GateHouse Media last year, which made it the nation’s largest newspaper chain.

In February, the company laid off more workers.

The company notes that it intends to continue laying off workers as planned. The memo attached to the email announcing furloughs and pay cuts states, “…[T]here will be some position eliminations as our normal course of business, but that is different than a company wide or division-wide layoff. We remain committed to integrating the two organizations fully in line with the synergy plan.”

Gannett has said that the cuts and acquisitions are its best bet on surviving in the new digital media landscape that has rapidly replaced the old, print-advertising based model.

Reaction to today’s announcement was swift. Current and former staffers, and other members of the media, were among those weighing in.

“This is really sad to hear, not just for the journalists but for all the communities relying on their work right now. Sending positive thoughts to my friends at Gannett,” said Steve Reilly, who formerly worked for USA TODAY.

Some were appalled to learn that reporters earn less than $38,000 annually, though industry insiders weren’t particularly surprised.

“When I worked for Gannett I didn’t know a single person making more than $38K,” tweeted Sara Amato.

Many were concerned about how the furloughs will impact papers’ ability to cover the coronavirus, and accused the company of valuing revenue more than personnel.

Gannett’s revenue has increased in recent years, which the company says is primarily due to its aggressive acquisition strategy. Business Wire reports that 2019 revenue rose 22.4 percent to $1.9 billion.

“Let’s go cover a pandemic with a skeleton staff. And people don’t read newspapers because….?” said Rick Brown. “Gannett’s profit over product raises its ugly head again. I feel for my former brothers and sisters out there grinding.”

In addition to concern for the communities Gannett covers, many worried how staff will survive the pay cuts.

The company has planned an “Ask Me Anything” call for staff at 1pm CT today.

You can read the memo below.