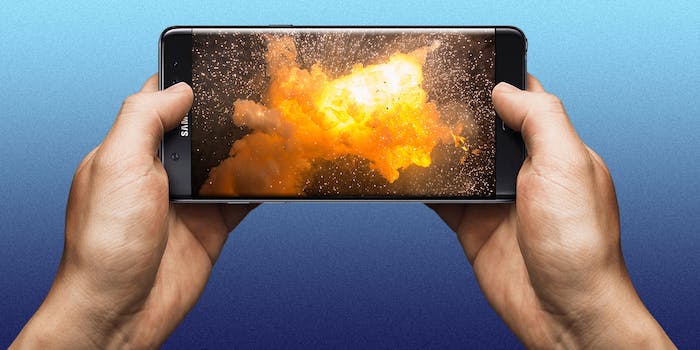 Refusing to return your Galaxy Note 7 is a dumb, dangerous thing to do

You're really missing the point here.

In the wake of confirmed reports that Samsung’s Galaxy Note 7 has damaged cars, planes, hotel rooms, and children, you’d think anyone carrying the phone in their pocket would be pretty enthusiastic about returning it for something else. You’d be wrong.

Somehow, against all logic, some Galaxy Note 7 owners are downright refusing to return the device, despite the phone’s notorious reputation for catching on fire and literally exploding. One particularly vocal individual has laid out his reasoning behind choosing to keep the clearly defective device in a post on Mashable, and it’s just too absurd not to highlight here:

Yeah, yeah, I’ve seen the warnings, gotten the grim texts from my carrier, heard tales of airline pilots throwing shade over the PA. Damon Beres, Mashable Deputy Tech Editor, wrote that “it’s now irresponsible, even dangerous, to own a Note7.”

Right from the start we have the admission from the author, Mashable editor Josh Dickey, that everyone in the world is telling him to return his device, not least of which is the company that actually built the thing. Well, at least we can establish that Mr. Beres has his head on straight.

But hold on — can we take a math break for a second?

Because when you do that, owning this supposed ticking time bomb is still statistically less dangerous than the act of getting in your car. Which you’ll probably have to do to bring it back.

Dickey then goes on to break down the statistics, based on the number of confirmed reports of exploding Note 7 devices, and compares that to the odds of getting in a car accident or being struck by lightning by the time you reach your 80th birthday.

In short, he picked whatever statistics supported his claim, listed them, and then used that as the basis for his decision to keep his recalled Note 7. Oh, and he uses the “recall calculation” from Fight Club as further proof that he’s better off hanging on to what he repeatedly insists is “the best smartphone on the planet.”

But Dickey fails to realize something about this entire fiasco: It’s not about you.

I think I speak for the rest of the human race when I say that if you feel the need to carry a device that could harm you—and only you—and refuse to exchange it even though you could do so for no charge, then by all means carry that ticking Darwin Award as long as you please. If you walked up to me on the street with a stick and said, “I’m going to poke this into my eye, okay?” I might try to stop you, but ultimately I wouldn’t care, so long as it didn’t affect me in any way.

However, you don’t get to decide where or when your Note 7 is going to have a catastrophic meltdown. Maybe it happens while you’re on the highway, and you run a family off the road or collide head-on with an innocent driver. Maybe you’re on a plane and disrupt the lives of your fellow passengers by prompting an emergency landing, or something even worse. Maybe you’re asleep in your hotel room and the phone decides to take down half the building.

I’m sorry, Josh Dickey, but nobody cares why you’re holding on to your piece of defective, dangerous technology. The only thing we care about is being far away from you whenever it decides to blow.