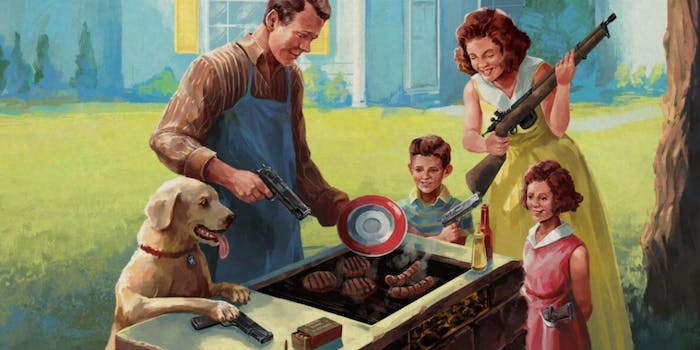 Others pointed out the total disregard for gun safety, noting that some family members are pointing their barrels at one another.

Gab, the social media platform popular among the far-right, is being roasted on Twitter after praising a bizarre picture of an armed family.

In a tweet on Saturday, Gab argued in defense of the photograph, which shows a white suburban family and a dog all carrying firearms.

“Our way of life must be preserved,” Gab tweeted.

The picture at first led to widespread confusion, specifically over why the Golden Retriever was armed as well. “What the actual fuck is this,” @nikicaga said. “Why does the dog also have a gun.”

Others pointed out the total disregard for gun safety, noting that numerous family members were pointing their barrels directly at one another and that the father and son both had their fingers on their triggers. “A way of life in which the family & the dog are armed, father & son have no trigger discipline, the son is pointing a gun at his mom w/his finger on the trigger & there’s live ammo near a hot grill?” @MikeDubose226 said.

Even the Libertarian Party of Texas couldn’t help but poke fun at Gab while pointing out the absurdity of the photo.

“The best way to preserve this family’s way of life would be to give them lessons on trigger discipline,” the account tweeted.

Countless people also suggested the dog would ultimately open fire on the family for unexplained reasons. “The dog is going to empty the clip into that entire family,” @binraccooon added.

Some argued the image was clearly made by an opponent of civilian gun ownership given its over-the-top nature. “Is this making fun of us or am I missing something here?” @AmericanKrogan asked. “This seems like some strange caricature a Liberal thinks in their head about American gun culture.”

It turns out the image actually originated from a virtual reality game for the PlayStation 4 that debuted in 2018.

Titled The American Dream, the game is set in a satirical version of 1950’s America “where your everyday needs are solved with guns.”

A trailer for the game shows everyone, including babies, using guns to complete every conceivable task from eating to opening a can of beer.

It remains unclear whether Gab, run by the Christian fundamentalist Andrew Torba, was sharing the photo in jest.

After being widely mocked, Gab claimed that its actual intention was to garner attention for its website.

While Torba clearly loves spending time on Twitter, the Gab founder as of late found himself scrambling to pick up the pieces after his poorly built social media network was hacked.