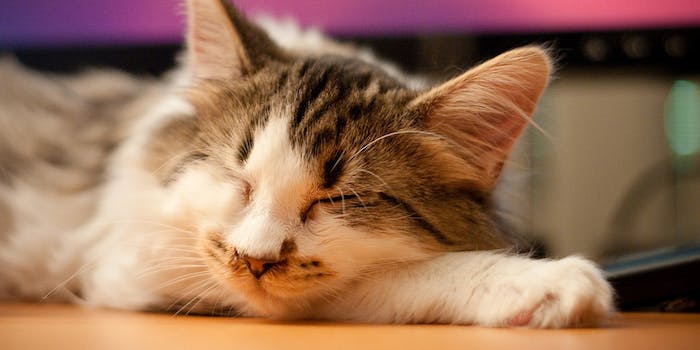 Finally, there’s a website for cat people who can’t have cats

A cat's purr can be therapeutic, and now everyone can benefit.

If you’re a cat person but you can’t snuggle up with a furry four-legged friend of your own, there’s a new online tool that can act as your digital feline.

Furry Friend, a recent addition to the popular myNoise collection of online sound generators, bills itself as a “frequency-shaped cat purr noise generator.” Its primary aim is to trick your ears into thinking that you’re cuddled up next to your very own little ball of fur.

It’s a soothing, relaxing sound. A cat’s purr is usually between 40Hz and 200Hz, and frequencies in this range have shown therapeutic benefits for both animals and humans, boosting bone density and healing.

The site itself begins its purring routine as soon as you load it up, but you can tweak the volume, speed, and other aspects of the sound using a slick little equalizer on the top of the page. You can set a timer to have the noise generator stop doing its thing at a specified time, which is great if you’re using it for a brief break or to catch a quick catnap.

myNoise also added the Furry Friend feature to its iOS app. Normally, each sound generator costs $0.99, but you can snag it for free for a limited time. If you’re allergic to cats, can’t have one in your apartment, or simply don’t want to take care of one yourself, this is the solution for you.

It’s kind of cool to be able to enjoy cats’ therapeutic benefits without having to stock up on lint rollers.

Photo via kennymatic/Flickr (CC BY SA 2.0)