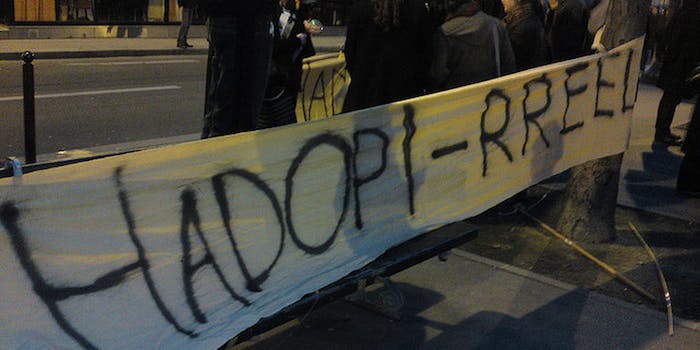 Contrary to previous reports, France’s HADOPI might not be in any danger of being repealed anytime soon, an expert told the Daily Dot.

The notorious “three strikes” program and law would punish citizens who repeatedly download copyrighted material by cutting them from Internet service. France’s Minister of Culture, Aurélie Filippetti, told Le Nouvel Observateur that HADOPI’s funding, which is used in part to email citizens thought to be downloading copyrighted content, was “expensive to send a million emails” and had “not fulfilled its mission.”

Some thought Filippetti’s words meant the beginning of the end for the program. “French Government is set to shut down its police service into illegal downloads,” CNET wrote. “France’s batshit HADOPI copyright law on life-support; three strikes is dying,” BoingBoing declared.

The death of HADOPI could have huge implications for Internet users in the U.S. A coalition of the country’s biggest Internet service providers, along with content lobbying groups representing the film and music industries, have repeatedly pushed to agree on a similar “graduated response” program called the Copyright Alerts System.

Though the law wouldn’t be involved, under the CAS, users could see their service slowed or interrupted if they’re found guilty of downloading copyrighted material. HADOPI is the first system of its kind, and proponents of the CAS have cited the French system as evidence why an American version would work.

For starters, she gave those quotes in January. “This declaration,” Zimmerman told the Daily Dot via email, “has been mostly carried out of a context.”

“A long time ago [Filippetti was] critical of HADOPI,” Zimmermann added, but “now [is] doing all that pleases the industry.”

Filippetti did, in fact, create a committee to reevaluate the HADOPI’s future. But it’s headed by Pierre Lescure, a former television director for the massive French entertainment conglomerate Vivendi Universal.

“Before his work even begun,” Zimmerman said, Lescure declared “that the principle of ‘graduated response’ and its objective to combat sharing shall prevail.”

One silver lining is that even Lescure has reportedly agreed that no piracy charge should warrant a citizen’s Internet service being cut off. But that will probably be replaced with more severe fines, Zimmerman said.

“We will most likely end up with cosmetic changes to the law,” he said, “an increased efficiency in the objective of intimidating people and discouraging them from sharing.”