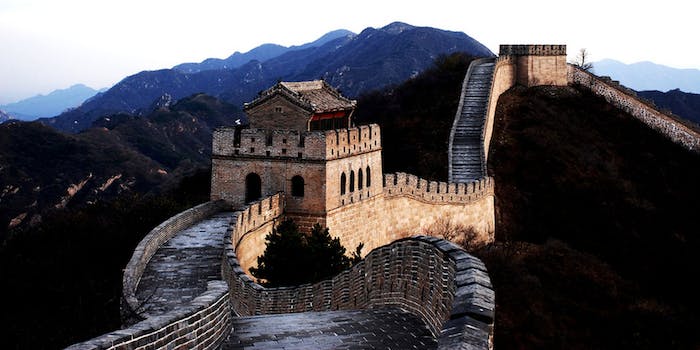 Will China block Amazon to kill this anti-censorship app?

A nickname like “The Great Firewall” isn’t tossed around lightly.

Indeed, the Chinese government’s system of online suppression is arguably the most formidable in the world. But it’s not just the firewall that gives China such a tight stranglehold on what its citizens can and cannot see online. Numerous laws force Chinese Internet companies to apply equally draconian content blockers to their sites.

One such company is Sina Weibo, a Chinese version of Twitter that has nearly 300 million users (Twitter, along with Facebook, Youtube and other social networks, are blocked in China). Sina Weibo has both a complex automatic content-blocking program and a rigorous team of in-house censors. In the past, they’ve scrounge the site for objectionable phrases like “June 4 massacre,” which refers to the infamous Tiananmen Square protest of 1989.

But now, an anonymous group of online activists think they’ve found a way to beat the censors with an app they say the Chinese government can’t afford to destroy.

The group, known as GreatFire, has been keeping tabs on government censorship for three years now, according to Mashable. The trio of activists behind GreatFire have been monitoring which websites the government blocks and collecting deleted Sina Weibo posts that they then re-publish at FreeWeibo.com.

The activists, who hide behind pseudonyms to protect themselves from government reprisal, tried launching a GreatFire App last year on iOS. It was a relatives success, but the link to the app was censored after just one week. The GreatFire team tried working around it with regular updates hosted on new links, but eventually the app was completely removed from the App store.

Not to be deterred, the activists are now launching a new app on Android they say cannot easily be taken down by the Chinese government.

Embracing a concept known as “collateral freedom,” the new FreeWeibo app is hosted on the Amazon Web Services (AWS) S3 cloud platform. This could be the game changer for FreeWeibo for two reasons. First, Amazon’s cloud is entirely encrypted, making it virtually impossible for the Chinese government to censor individual postings on the app. Chinese sensors can see the content hosted on AWS, but they will not be able to locate the final address. The only way to block the content is to block the entire AWS network.

This is where the “collateral freedom” concept comes into play. FreeWeibo is wagering that the Chinese government won’t be willing to take down the entire Amazon cloud in China. Thousands of businesses rely on the Amazon cloud. Despite the government’s obsession with blocking content it finds objectionable, it won’t go so far as to self-inflict such harsh economic wounds—or so the theory goes.

The collateral freedom theory was first floated in a paper published last year. Experts like Michael Carbone, manager of tech policy and programs for the human rights group Access, says it could be a game-changer in the fight against Chinese censorship.

It’s a strategy that seems to make sense. The collateral freedom approach has already been used by GreatFire to host their regular website. The original version of the website—launched in 2012 and not hosted on the AWS cloud—was shuttered by the Chinese government in five days. Now that the site has been relaunched on the cloud, FreeWeibo gets some 600,000 visits a month. Based on language settings, 95 percent of the visits are believed to be from China. Nearly 300 million Chinese citizens have Android phones, so an app on the mobile platform could greatly expand GreatFire’s reach.

But it’s not a foolproof plan. Amazon has remained quiet about the Web version of FreeWeibo being hosted on its cloud. However, if the app were to become a huge hit, the company may face pressure from the Chinese government to respond—remember, the online retailer also has a lot to gain from a reliable business relationship with the People’s Republic.

Also, the Chinese government has proven truly adept at cyberwarfare. There is always the possibility that they could find someway to crack the FreeWeibo app. For years, VPN’s were seen as a reliable way to circumvent Chinese censors until a major crackdown last year.

Still, the activists believe strongly in their mission to enable free online communication between Chinese citizens, and they think this app is the closest they’ve come to achieving that goal.

“Since the founding of our organization, I don’t think we’ve come as close to achieving that goal as we are about to with the release of [the FreeWeibo] Android app,” one of the GreatFire members told Mashable. “Because it’s really changing the rules of the game.”