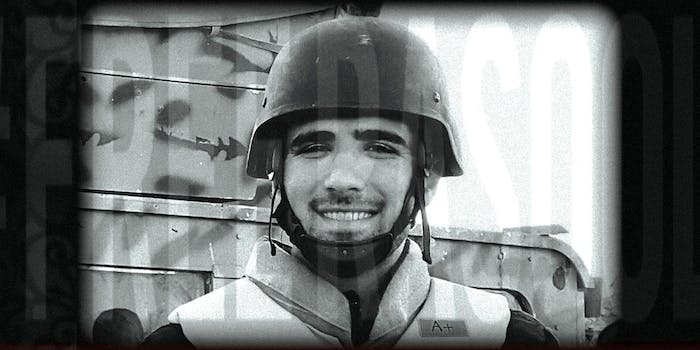 Detained while covering the conflict in Turkey’s Kurdish region on Aug. 27, Mohammed Rasool and two British journalists for Vice News—Jake Hanrahan and Philip Pendlebury—were arrested and charged with helping a terrorist organization, an accusation the journalists call “entirely baseless and absurd.”

According to Hanrahan, the three journalists were held in a high-security anti-terror facility, which one guard described as an “ISIS prison.”

Both Hanrahan and Pendlebury were released after 11 days in custody, but Rasool’s detention continues.

“The very existence of democracy relies on a free and thriving fourth estate.”

As of Wednesday, Rasool has been imprisoned for 56 days. In protest, nearly 100 Vice Media digital channels participated in a two-hour media blackout on Wednesday.

At that time, anyone who landed on a Vice homepage while searching for news or entertainment was met with a holding page asking them to take action to help free Rasool. A Change.org petition launched by the Committee to Protect Journalists (CPJ), which calls on Turkish President Recep Tayyip Erdoğan to release Rasool, collected nearly 10,000 signatures during the blackout.

“The ongoing imprisonment of Mohammed Rasool is a tremendous injustice, one that highlights the arbitrary, capricious, and punitive nature of the Turkish criminal justice system,” Joel Simon, CPJ’s executive director, said in a statement. “It is also a reminder of the essential role of media support staff, the fixers, stringers, translators and drivers who risk their lives to bring us the news.”

Rasool, a 25-year-old graduate student, was hired by Vice News as a fixer—a local journalist who helps foreign correspondents carry out on-the-ground reporting in unfamiliar and often dangerous regions. Rasool’s reporing has been published by the Associated Press, U.S. News & World Report, Stars and Stripes, and several other U.S.-based publications. He is said to be fluent in five languages.

In a statement Wednesday, Vice founder and CEO Shane Smith called on social media followers to use the hashtag #FreeRasool and to continue exerting pressure on the Turkish authorities.

“The very existence of democracy,” Smith said, “relies on a free and thriving fourth estate.”