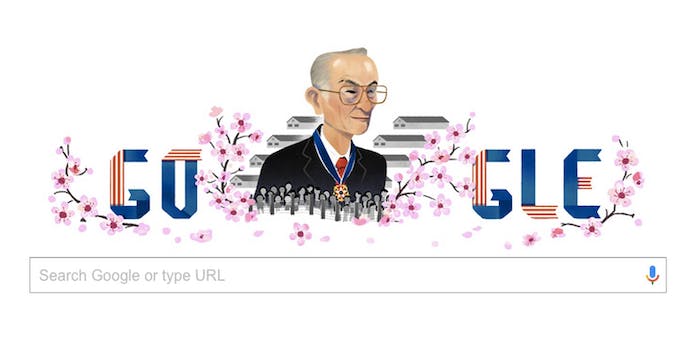 This can't be a coincidence.

They say a picture is worth a thousand words, but today’s Google Doodle honoring civil rights activist Fred Korematsu has left many speechless.

Korematsu, who died in 2005 but would have turned 98 today, fought against Japanese interment in a landmark Supreme Court case that some say laid the foundation for Brown v. Board of Education. President Bill Clinton awarded Korematsu the Presidential Medal of Freedom in 1998, and the states of Virginia and California officially recognize every Jan. 30 as the Fred Korematsu Day of Civil Liberties and the Constitution.

The Google doodle today celebrates the birthday of Fred Korematsu, the namesake of the 1944 SCOTUS case challenging Japanese internment. pic.twitter.com/BKrzGS2ZXT

Though he lost his Supreme Court battle, in which SCOTUS ruled 6-3 that the internment of Japanese Americans was constitutional, Korematsu remained an ardent supporter of civil rights throughout his lifetime, filing amicus briefs warning against the suspension of civil liberties after 9/11 and working with the nonprofit Constitution Project for the last few years of his life.

In light of this weekend’s events—which saw President Donald Trump issue an executive order on Holocaust Remembrance Day that banned the immigration of residents of seven Middle Eastern nations, followed by dozens of protests at airports across the nation as green card holders and refugees were detained—many are using the day to share relevant quotes from Korematsu and remind others of his legacy on social networking sites.

Fred Korematsu, born today in 1919, objected to the WWII-era internment of Japanese Americans. May we learn from our mistakes. #NoMuslimBan

“If you have the feeling that something is wrong, don’t be afraid to speak up.” — Fred Korematsu #GoogleDoodle

Given that Google co-founder Sergey Brin joined the protests at San Francisco’s airport this weekend, it’s not a stretch to think Google is making a political statement with its Doodle today. In previous years, the Jan. 30 Doodle has honored an Indian artist, a Ukrainian author, and others.

Sergey Brin was straight up teaching an infant how to protest. pic.twitter.com/VZEcXiAQe4

If you’d like to learn more about Korematsu and his legacy, a new children’s book titled Fred Korematsu Speaks Up is on shelves today.