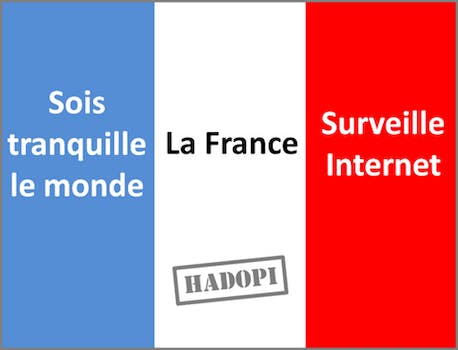 Surprise! They got the wrong guy.

Introduced in 2009, HADOPI is a French acronym that refers to that country’s so-called “three-strikes” law and system. Under it, people thought to be downloading pirated material are successively warned until their third notice, which can coincide with criminal punishment or having their Internet connection shut off. (The U.S.’s major Internet service providers are reportedly starting a similar service this year called the Copyright Alerts System, though it’s faced repeated setbacks.)

The 40-year-old man from the town of Belforx, whose name wasn’t released, told a French court that he didn’t download any copyrighted material, but in the process accidentally indicted himself, according to TorrentFreak. Under HADOPI, whoever pays the bills on an Internet connection is responsible for all piracy that occurs on it. The man testified that his now-estranged wife downloaded Rihanna songs on the account he paid for—which meant he knew someone was infringing using his account, and thus he had to pay.

Though the villager was the first to be punished under HADOPI, he’s unlikely to be the last: 13 others have been summoned to court for violating the policy.