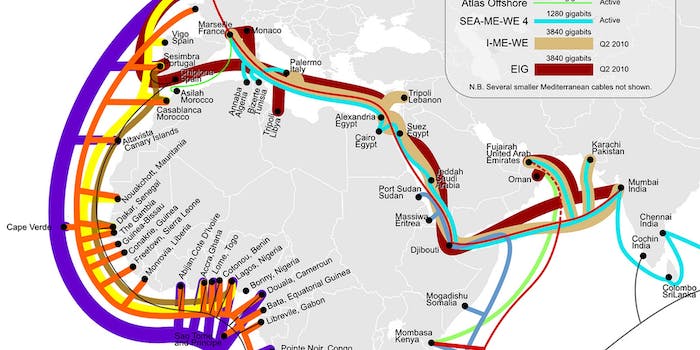 The investigators at Reflets.info have also uncovered information about former President Nicolas Sarkozy's interests in the surveillance game.

For over a year, French investigative publication Reflets.info has been investigating surveillance activities on the many fiber-optic networks connecting France to northern Africa and the Middle East.

“Our observation is that everywhere you can find a Eagle/Amesys-Bull surveillance installation sold by France to a foreign dictatorship, you also find an Alcatel fiber optics plugged to the country,” Reflets’s Fabrice Epelboin told the Daily Dot. “Our guess is that those surveillance installations are oversized in order to have a dual usage,” giving the buyer surveillance capacity and allowing French intelligence officials to capture, copy, and analyze traffic.

Reflets has detected such surveillance installations in a number of countries, including Libya, Benin, Morocco, and Qatar.

The Alcatel cable to Tripoli, Libya, for instance, contained capacity far in excess of possible country-specific users. The most likely use for such an overbuild is the capture and copy and redirection of traffic, according to Reflets writer Kitetoa.

Eagle/Amesys-Bull and Alcatel are both French companies with a cozy relationship to the government. In fact, the French State Secretary for the Digital Economy said France would never let Alcatel go bankrupt because its fibre-optic network was a critical part of their cybersurveillance program.

Other things established by Reflets (along with other French publications like the Le Canard Enchainé and Le Figaro) include the following:

The French government’s relationship to these activities is possibly even more bald-faced than the American government’s attitude toward PRISM. Gérard Longuet, former defense minister under Sarkozy, for example, once told the National Assembly that he knew nothing about the French company Bull.

In America, the NSA and other intelligence organizations and their defenders have made the case that their activities are OK because they are legal, even if that legality is of a marginal, secretive nature. France domestic spying activities, Epelboin notes, are legal simply because they are not illegal.

“France has no First or Fourth Amendment,” he said, referring to the U.S. Bill of Rights’ guarantees of free speech and restriction against unreasonable search and seizure, respectively. “So technically, these actions are all legal.”