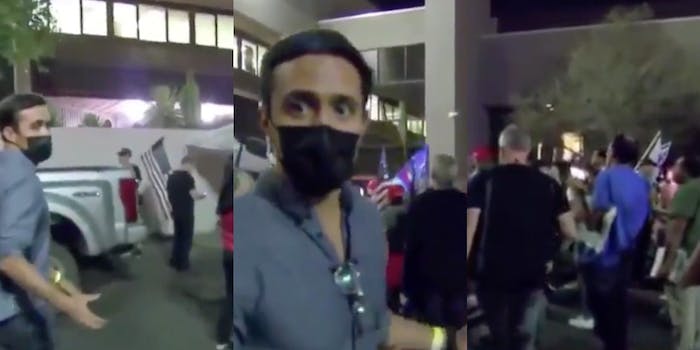 The chant derived from the network being interestingly quick to call Arizona for Biden.

A video trending on Reddit, via MSNBC, shows a crowd of Trump supporters in Arizona chanting, “Fox News sucks!” as a response to the conservative-leaning network calling the state for Democratic candidate Joe Biden.

The “Fox News sucks” chant derived from the network being interestingly quick to call Arizona for Biden on election night. It’s a move that bothered President Donald Trump so much that Jared Kushner reportedly reached out to Fox News tycoon Rupert Murdoch and other executives to force the network to withdraw its declaration.

Trump has always had a curious relationship with Fox News, which has pumped him up, and now appears to be less bullish on him.

Trump appears to be melting down, not having any real understanding of how voting works—and calling for a stop to the vote count… which would mean he loses as challenger Joe Biden is currently ahead.

Several-hundred demonstrators came out to chant “count the vote” on Wednesday evening to chant outside the Maricopa County Elections Department building as officials continued the tallying. Biden has led Trump in Arizona since the initial figures, but the president’s campaign officials believed that new counts would close the distance.

Protesters also demanded answers about an unfounded controversy being called “Sharpie Gate.” Trump voters claim deception by officials, now believing they invalidated their ballots with felt-tipped pens. However, the state emphasized that vote-counting machines would still read the ink.

“There is no concern about ballots being counted because of the pen that was used to make the ballots,” Hobbs said. “All of those ballots are being counted. And even if the machines can’t read them for some reason, the marker bled through to the other side, we have ways to count them.”