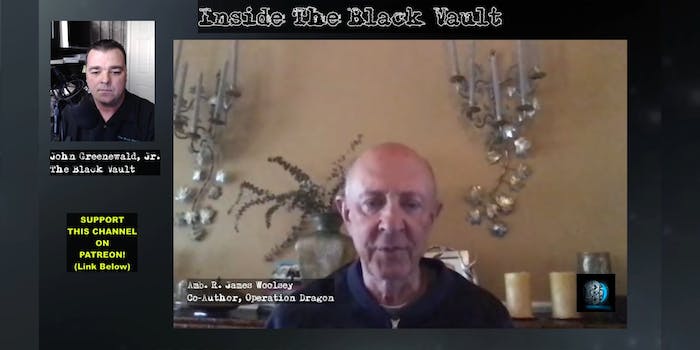 Yet another former government employee has furthered the possibility of UFOs and alien lifeforms visiting Earth, saying a respected friend’s aircraft once “paused at 40,000 feet.”

R. James Woolsey, former CIA director under Bill Clinton, was on the YouTube conspiracy channel the Black Vault discussing his upcoming book, “Operation Dragon.” In it, he claims that Lee Harvey Oswald assassinated President John F. Kennedy at the direction of Soviet Russia.

The conversation with host John Greenwald Jr. eventually veered into the subject of UFOs, where Woolsey has mastered the art of implying without remotely confirming.

Woolsey claimed that he had various stories of unexplained flying phenomena run past him, which left him open to the possibility of alien life. He also implied that there could be news with more information in the coming weeks.

“There have been over the years now events of one kind of another, usually involving some kind of aircraft-like airframe,” he says.

Woolsey then said that the accounts “always seemed pretty far-out to me.” But then he says an unnamed friend “was able to have his aircraft stop at 40,000 feet or so and not continue operating as a normal aircraft.”

Greenwald said he recalled John Brennan, CIA director for former President Barack Obama, saying that it would be “arrogant” to believe humans are alone.

During a curious December episode of “Conversations with Tyler,” hosted by revered academic Tyler Cowan, Brennan said: “I think it’s a bit presumptuous and arrogant for us to believe that there’s no other form of life anywhere in the entire universe.”

On March 19, John Ratcliffe, former President Donald Trump’s director of national intelligence, claimed on a Fox News show that the government had recorded much more than the public is aware regarding UFOs.

Given the three testimonies happen in concert, it’s a possibility we are being prepped for … something.