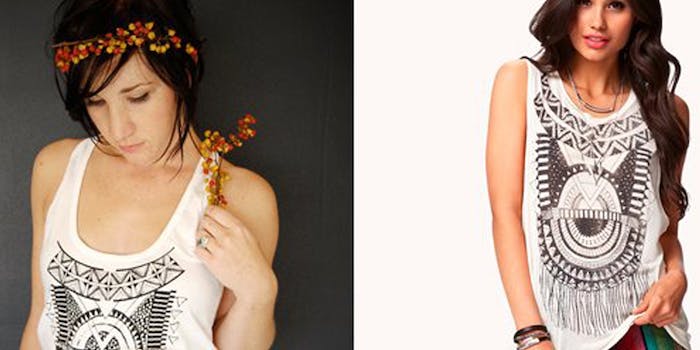 An indie designer has taken to Facebook to accuse the company of ripping off her tribal-themed design for a women's shirt.

Since the company was founded in 1984 by Do Won Chang, Forever 21 has sold clothing designs illegally swiped from aspiring artists, small businesses, and even fashion giants like Diane von Furstenberg.

In 2011 Chang and his daughters Esther, the firm’s creative director, and Linda, its head of marketing, blamed the company’s misfortune on third party vendors who do their own manufacturing. The family also insisted that “we’ve put legal procedures in place [to avoid breaching copyright],” the Guardian reported.

These legal procedures have apparently amounted to nothing.

The latest designer to accuse Forever 21 of copyright infringement is Sara and Shana Barrett, who owns the Boston-based clothing boutique Bark Decor. Late Wednesday night, a Bark customer discovered that a women’s shirt the company designed in 2011 had been copied and put up for sale on Forever 21’s website. Bark Decor posted a photo of their design—along with Forever 21’s—on Facebook, where they urged people to raise awareness. 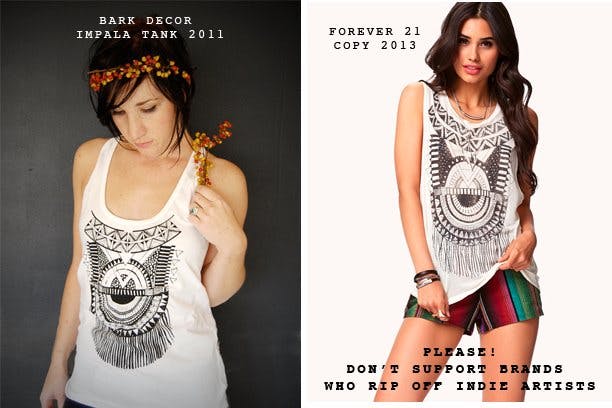 “THANK YOU EVERYONE for sharing the image of our stolen design,” Bark wrote. “This is the best way to expose what this company is all about, I’m not the first and won’t be the last affected by this. I encourage everyone to vote with their dollar, not just in clothing stores but with what we want to see more of in the world: charities, organic or local foods, independent artist, musicians, peace makers and storytellers.”

The Daily Dot has reached out to Forever 21 for a comment.

Bark Decor’s plight has has captured Reddit’s attention, where users pointed out that many other clothing companies, including Target, Zara, and H&M, have also been accused of pilfering designs.

“Forever21 and any other retailer that imports from China often has items like this,” 2plus2equalscats commented. “The buyers may or may not even know whose original design it was. My company gets our designs ripped off all the time. While we contact the people selling our fakes asking nicely if they wouldn’t mind stopping- it’s not really their fault. They are purchasing from people sourcing directly from the factories. Those factories likely bought the designs from the original factory. Not much you can do about it since it’s overseas.”

In January, Forever 21 was forced to take down a men’s T-shirt after it was discovered that the design has been stolen from beloved Tumblr and deviantART illustrator Kelly “moosekleenex” Bastow. Forever 21 blamed the incident on its third party vendor.