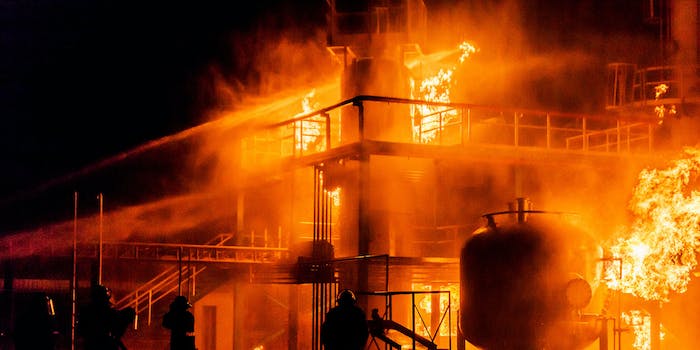 Given the current climate, it's no wonder people latched on.

A salad packaging plant in Salinas, California is destroyed in a massive fire, while at almost the exact same time, an onion processing plant in Texas is engulfed in flames.

Planes nosedive into the heart of food processing plants in Georgia and Idaho. A warehouse with 50,000 pounds of food burns, as well as an animal feed mill, a cereal processing plant, and a meat packing plant.

All of them alit, taking America’s precious food supply with them.

Is it mere coincidence? Just some bad things happening at the same time? Or is it a sinister plot to starve the United States and cull the herd of useless eaters?

People who assume that nothing happens by accident believe the latter. And they’re spreading an emerging conspiracy theory that food processing plants around the country are being burned down or destroyed as part of a concerted effort to take control of America’s food supply. Starting around April 20, conspiracy blogs and social media accounts began spreading lists of meat-packing plants, food processing facilities, cereal mills, and other buildings related to the packaging of food that had all “mysteriously” burned down or been destroyed.

To be clear, the fires are real. The salad packaging plant in California was a major processing facility of Taylor Farms, and it burned to ashes on April 13. A few weeks earlier, a fire destroyed the Penobscot McCrum potato processing plant in Belfast, Maine. And light planes did crash into areas near food processing plants in Georgia and Idaho, an animal feed mill burned in Louisiana in January, and a food bank attached to a church in Arizona went up in flames in March. And there are more.

Given both the number of fires, and the critical nature of the food processing industry, it’s not hard to understand why some people believed that these couldn’t have been coincidental—someone had to be behind them. And whoever it was probably had a very bad reason for doing it.

Like many of these other theories, the lists tend to have the same core of incidents but vary in details. Some claimed 16 different plants, such as the April 21 post on the popular Christian prepping site “The Economic Collapse Blog.” That site offers “A List Of 16 Major Fires That Have Occurred At Key Food Industry Facilities In The U.S. Since The Start Of 2022,” warning that “the collective loss of all of these facilities will make the coming food shortages quite a bit worse.”

Other tweets and stories claimed the number was 18 plants, 20 plants, “nearly two dozen” plants, or simply “a number” or “a string.”

The theory became especially potent when it mixed with extant supply chain issues, and the conspiracy theory that Bill Gates has been buying the majority of American farmland for his own evil purposes. Throw some tweets in about how we’re “not allowed to talk about it” and the media “doesn’t want you to know” and you have the makings of a potent list-based conspiracy theory that touches on real food insecurity issues and made-up paranoia.

There’s no evidence at this moment of a coordinated attack on America’s food supply. The fires all seem to be accidents owing mostly to equipment issues, and food processing plant fires aren’t uncommon, with several dozen occurring every year at the more than 25,000 food processing facilities around the country. Snopes found over two dozen that took place just in 2019.

And many of the fires that have made various lists actually took place in 2021, giving a false impression that more fires are happening in a shorter time.

Of the fires that did happen in 2022 so far, they either did little or no damage, or have already been cleared as not suspicious. The Taylor Farms fire, for example, while devastating, won’t put the company at risk, and was deemed to have started from a welding accident. The Maine potato plant fire began thanks to a faulty deep fryer. Other than the coincidental timing, there’s nothing bizarre happening here, and experts don’t believe that the U.S. food supply is at risk.

But just the sheer number of fires, combined with the virality of the lists, was enough to put the conspiracy theory into the popular consciousness. Google Trends data shows that search traffic for related terms spiked from virtually nothing on April 19 to growing into a huge trend by April 20. That next night, Tucker Carlson devoted a segment of his Fox News show to a mysterious plane crash in Covington, Georgia, when a light plane went down and crashed into a row of trailers parked near the local General Mills plant that morning.

Notably, the plane didn’t actually crash into the plant itself. But the chyron on the Carlson segment clearly said it did, and adding the incident to the already growing list of fires and accidents at plants around the country was too tempting to resist. Carlson claimed that “food processing plants all over the country seem to be catching fire” and had a guest on who echoed the same thing, with Carlson tying it into food shortages and comments from President Joe Biden that upcoming food shortages around the world “are going to be real.”

Carlson ended the segment by claiming that the “onus is on people who think this is a conspiracy theory to explain what’s really going on.”

The Carlson segment came just as interest in the conspiracy theory was rising thanks to viral posts on Twitter and other sites.

Before April 20, few people outside right-wing conspiracy internet were talking about it. After Carlson turned the incidents into a viral hit the next day, the story was everywhere, and tracking its various permutations became impossible.

So what accounts for the spike in interest the day before Carlson started talking about the fires?

Tracking the origin points of conspiracy theories is extremely difficult, but there are clues as to how it grew so quickly. While there are a few Twitter threads and blog posts about the “spate” of fires before April 20, none got the viral traffic that posts after did. The first truly viral post linking the fires together appears to have come early on April 20 from an anonymous Twitter account called “Dr. Benjamin Braddock,” apparently named after Dustin Hoffman’s character in The Graduate.

That tweet claimed: “Several very large food processing plants in the US have blown up/burned down in the past few days” and linked to a Newsweek story on an explosion at a Shearer’s Foods plant in rural Oregon, one of the major suppliers of potato chips to the Western U.S. The Newsweek story doesn’t mention other fires, but the tweet alleging there was a pattern received over 11,000 retweets in a week.

Braddock then added nearly a dozen more incidents to a thread, including a plane crash into an Idaho potato processing plant (no plant employees were hurt), a fire at an independent food distribution plant in Oregon (said to have caused limited and temporary damage), and most significantly, the Salinas fire, which was already known to be an accident.

When reached for comment by the Daily Dot, Braddock responded that he wasn’t guessing at one particular reason for the fires, only pointing out that a number of them had taken place in a short time “My theory is that because a lot of employees seem disinterested and disengaged from their jobs these days—an artifact of pandemic burnout—more serious accidents are likely to occur and at a greater frequency,” he wrote, while also saying he wasn’t ruling out either “geopolitical sabotage” by either Russia or China, or eco-terrorism.

By the time Carlson’s segment on the plane crash and fires aired, Braddock’s thread was already viral—an archived version of the tweet shows it already had almost 7,000 retweets by early afternoon on April 21..

But there are other possibilities for what made the conspiracy go viral. One is its spread on Telegram, particularly a meme showing various headlines about the fires that was posted late on April 20 by a Telegram user called “Thuletide.” The post by Thuletide, who claims in their bio to cover “anti-White hate” and “race realism,” (two buzzwords in the white nationalist community) included the hyperbolic text “Nothing to see here, just every food processing plant, pantry, and distribution center in America “randomly” catching fire and exploding within the space of a few weeks.”

Though it’s not clear how much it broke out beyond Telegram, the post received nearly a quarter of a million views there and was shared over the next few days by a number of major QAnon influencers, including Patrick Byrne, Jovan Pulitzer, QAnon John, and Jordan Sather.

From there, a slew of other viral posts and stories about the fires and who “really” set them have appeared. The idea of coordinated attacks on America’s food supply is now everywhere.

There are other possibilities for what spiked interest in the theory and brought the story to Carlson’s attention, but given the timing, it’s likely that either the Braddock thread or Thuletide post was the initial spark for the theory going viral. But however it reached Carlson, the timing for an alleged food false flag to go viral was especially fortuitous.

The entire world is already dealing with major issues in the wake of the COVID-19 pandemic, including high inflation and supply chain issues. Climate change has brought massive heat waves and drought, further imperiling the world’s food supply. Food, gas, and housing prices are higher than ever. The war between Russia and Ukraine is the largest in Europe since 1945, and the threat of nuclear escalation is growing. Many people are already deeply on edge, and a spate of fires striking the heart of the food supply in the United States is perfect fodder for a conspiracy theory from people who already believe that we’re in some kind of endgame of the global elite’s plan for the rest of us. And it doesn’t help when the president makes apocalyptic comments about food shortages.

In late March, President Biden made a remark that made similar waves in conspiracy circles, claiming there would be “real” food shortages worldwide due to the massive sanctions put on Russia. A president already at the center of countless conspiracy theories remarking that there will be food shortages, followed weeks later by over a dozen food processing plants experiencing fires or other accidents? No matter who first put all the pieces together, it shouldn’t surprise anyone that a theory about all of it being related broke out.

Fortunately, it appears to be just that—a theory that happens to fit both some actual facts, and the paranoia of conspiracy theory believers.