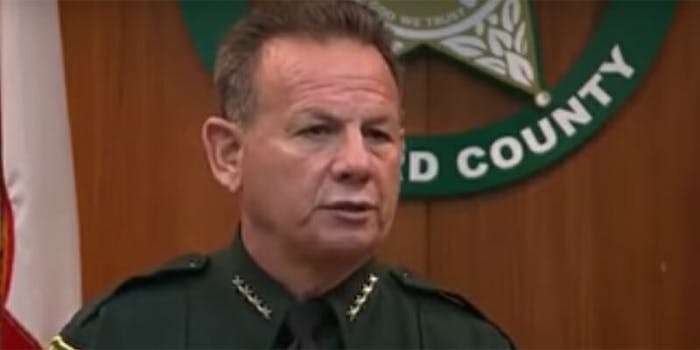 Following reports that the armed deputy on duty during the mass shooting at Marjory Stoneman Douglas High School last week did “nothing” as the gunman opened fire on students and teachers, police are reportedly guarding the deputy’s home at his family’s request.

Broward County Sheriff Scott Israel said Thursday he was “devastated” after seeing video footage showing the deputy, Scot Peterson, standing outside the building but never entering during the shooting that killed 17 people.

“Sick to my stomach,” Israel said. “He never went in.”

According to BuzzFeed News, Peterson was placed on unpaid leave and then filed for retirement following revelations from the surveillance footage.

People on Twitter saw the reports of the Peterson’s non-action during the shooting as evidence that placing more armed guards or giving guns to teachers—both ideas proposed by President Donald Trump in the past few days—will not solve the country’s school shooting problem.

I guess a “good guy with a gun” isn’t the strategy after all. https://t.co/3rgPBc0CAv

Even a sheriff's deputy, presumably with significant training, couldn't react properly in a crisis situation.

But 10th grade history teacher Mr. Smith, whose tactical experience amounts to watching "Band of Brothers", much less held a gun, will save the kids if he's armed?

Sheriff today: My deputy didn't go inside the school during the shooting.

But yeah, let's trust *only* the govt to keep us safe.

An armed sheriff’s deputy won’t do it, but a kindergarten teacher who is already underpaid should be expected to be weapons experts, and be stocking an A-15 in their classrooms to help NRA client gun sales. What could go wrong. https://t.co/VjKMjXpeUt

The armed, "trained" deputy failed to engage the shooter but teachers are supposed to be able to? pic.twitter.com/8pa7hp3XUf