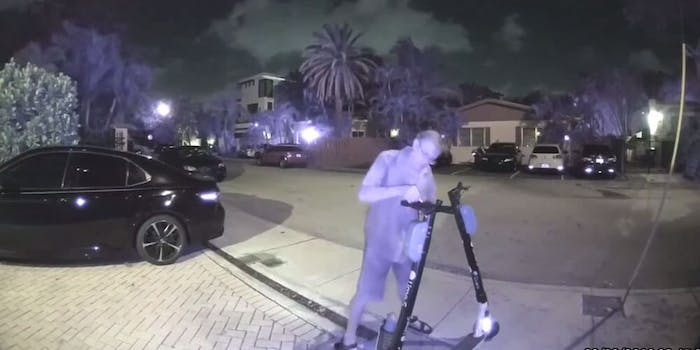 A Florida man was recently arrested after police say he was caught on camera cutting the brake lines of two electric scooters.

Randall Williams, a 59-year-old Fort Lauderdale resident, was taken into custody and accused of being responsible for over 100 similar incidents as well.

A video posted to YouTube by the Fort Lauderdale Police Department shows a man, identified as Williams, damaging two Lime e-scooters on Sept. 22.

Police say they have linked Williams to 20 cases of vandalism against e-scooters, causing roughly $1,400 in damage and believe he could be responsible for over 140 cases in total.

Williams was charged with a third-degree felony count of criminal mischief and later released on a $500 bond.

“Anyone who witnesses someone tampering with electric scooters should call 911 immediately,” the department said. “Additionally, anyone who finds a scooter that appears to have been tampered with should contact the vendor.”

Although police have not revealed whether a motive has been determined for the crime, Fort Lauderdale is far from the first city to see such hostility toward e-scooters.

Critics of e-scooters say the contraptions are not only unsightly and dangerous but that they clog sidewalks in the process.

In fact, e-scooter company Bird has included vandalism sensors on its newer models in response to the growing backlash.