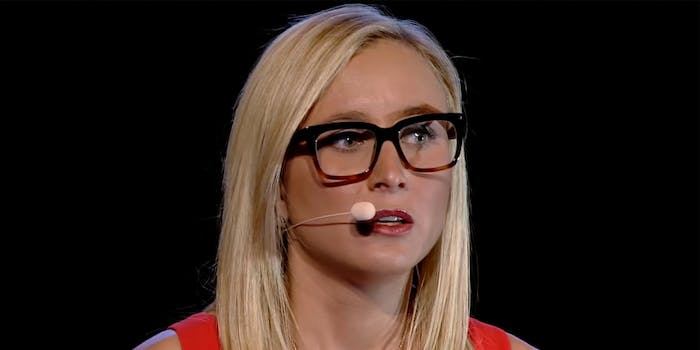 Lauren Book learned that her images have been online since 2020.

Late last year, state Sen. Lauren Book (D) received a message that someone had obtained nude images of her and was threatening to release them and destroy her political career.

A South Florida CBS affiliate reports that Book notified the Florida Department of Law Enforcement (FDLE) about the threat. Book told the outlet that the person was sending “threatening and disturbing images and messages to my phone, including distorted, fake and stolen images created in an effort to intimidate, threaten, and extort me.”

An undercover agent subsequently took over communications with her would-be extortionist.

The agent negotiated $4,000 in exchange for the person deleting the images in front of them. Days later, Book’s alleged extortionist was arrested. An FDLE official told CBS that the defendant confessed to sending Book the messages and images.

Book doesn’t know how her private images were stolen. She told Fox News that the images included a photo of a lumpectomy and of a bad sunburn. Through the course of the investigation, she learned that nude photos of her had been traded online since at least 2020.

Book, who is also a survivor of childhood sexual assault and a longtime advocate in the field, shared her story to spread awareness about the issue and her bill. She told the Associated Press that the recent events reopened wounds she carries as a survivor.

“Truth be told, if it weren’t for my children, I would have ended my life,” she said. “It brought up all of the stuff. All of it that you think that you’ve gotten under your belt, that you’ve fixed it and you’ve changed it and then all of a sudden, here it is in front of your face.”

She told the AP that those trading in her stolen images were gleeful to learn that she’d been sexually assaulted. On a website, they were reportedly discussed trying to find images of her being assaulted as a teen.

“They were reading about who I was and talking about how I’m a survivor of rape, so let’s try to get some rape videos,” she said. “Can we get some of her getting raped, killed, tortured? Can we make some of that? Can we find it? How can we get it?”

Her tweet was met with many messages of support. People thanked her and called her brave for sharing her story.

Book’s tweet was also trolled by people victim-blaming her.

An anonymous Twitter user chimed in: “Here’s a thought. Keep your clothes on.”

Some defended Book’s—and everyone else’s—right to take whatever images and videos of themselves that they want.

“What happened to you is wrong!” wrote one. “And the victim blame is wrong as well. I hope this bill gets passed!”