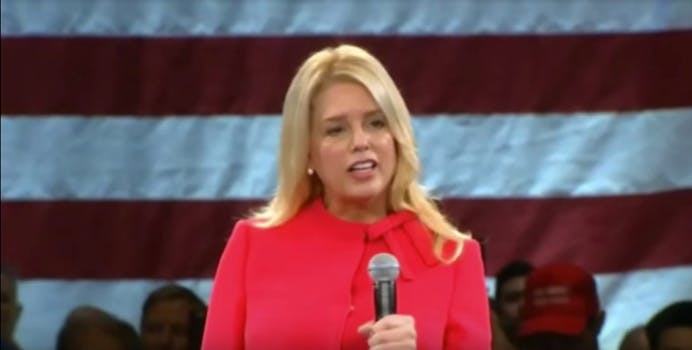 Florida's chief prosecutor nabbed a $25,000 donation from Donald Trump himself.

A source told Bloomberg on Thursday that the 52-year-old chief prosecutor will take a job in the White House, though it is not clear what her title would be.

Bondi came under scrutiny last year after it was revealed that the Trump Foundation made an illegal donation of $25,000 in 2013 to a group tied with her re-election campaign. The state’s attorney general office had been considering whether to pursue legal action against Trump University for fraud after nearly two-dozen Floridians filed complaints, reported the Miami Herald.

Following Trump’s donation, Bondi announced that there were “insufficient grounds” to pursue legal action against Trump University. A political consultant who worked on Bondi’s re-election campaign told the Associated Press in June 2016 that Bondi had personally solicited the donation from Trump weeks before she dropped the case.

The IRS found Trump to be in violation of tax laws for his donation to Bondi. Trump was forced to pay a $2,500 fine.

Both the New York Times and the Tampa Bay Times found that Bondi regularly dropped or declined to pursue investigations on Dickstein clients.

Bondi was the lead figure in the rejection of Obamacare by Republican states. Bondi made Florida front and center in the challenge of the new healthcare law when she served as the lead attorney general in an unsuccessful 2012 lawsuit filed by 26 states to overturn the Affordable Care Act. The Supreme Court voted 5-4 to uphold the healthcare law.

Bondi is anti-gay marriage and called on the Supreme Court in a legal brief to extend the stay on the state’s ban on same-sex marriages. Her campaign has received funds from anti-abortion political group Justice for All.

Bondi actively campaigned for Trump throughout Florida during the 2016 presidential election and addressed the 2016 Republican National Committee Convention in Cleveland.