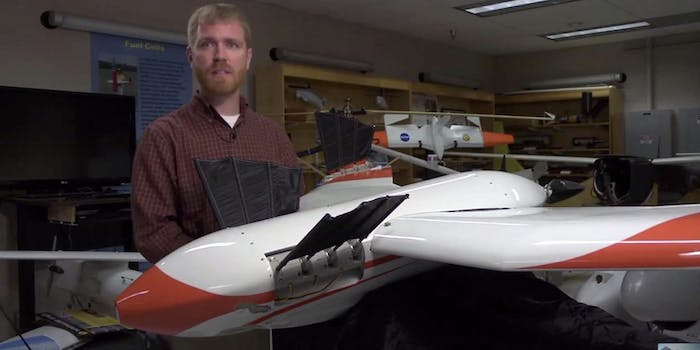 The Navy’s new drone is practically a Transformer

The United States Naval Research Laboratory (NRL) has created an unmanned aerial vehicle that can turn into a submarine for water missions. It’s called Flimmer, and like every project the corporate research firm is tasked with, it could benefit the military with a five- to 10-year time frame.

What it does in the water depends entirely on how you’ve configured the payload, according to NRL aerospace engineer Dan Edwards.

“The payload will vary wildly,” Edwards told the Daily Dot via phone. “Everyone I talk to has a different mission they want to run using Flimmer.”

The aircraft’s most straightforward application is to more efficiently navigate the currents in large bodies of water. “The gulfstream is fast relative to still water,” Edwards continued. “Flying up-current saves you the trouble of navigating it on the water.”

As water is roughly 1,000 times more dense than air, aquatic vehicles require more energy to move. Flimmer can travel up to 57 MPH through the air, completely avoiding this expenditure of energy before landing in water and submerging. (The multimodal craft travels at 11 MPH when it’s in the water.)

Edwards hypothesizes a number of use cases in the video above: Flimmer could carry sensors to study aquatic environments or identify the source of oil leaks.

Edwards looks forward to continuing to refine the flapping propulsion system for getting through the water. He says there are still efficiency gains to be made there, and in general, the team is focused on improving Flimmer’s maneuverability more than its speed or range.