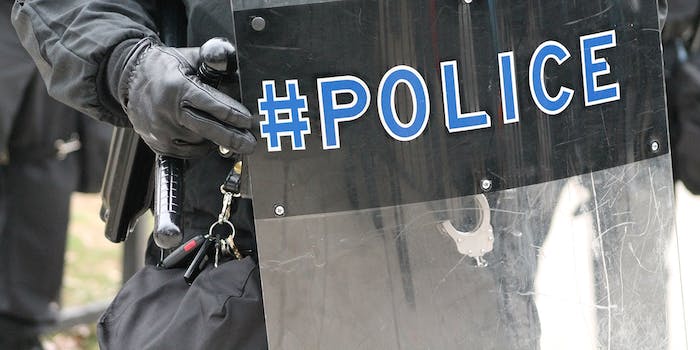 You can’t fit all these hashtags in one tweet.

The ongoing protests stemming from Ferguson, Mo., this August have spread into a months-long national movement, transforming streets and public spaces across the country into avenues of dissent. While the energy and debate occupies physical spaces, it is also capturing the Internet. This movement is taking social networks by storm, with its plethora of hashtags regularly trending nationally and internationally.

In an attempt to capture all the hashtags this movement is sending out, here is a guide to the people’s tags online.

Tamir Rice, a black 12-year-old boy in Ohio, was fatally shot by Cleveland police after reports of him playing with a gun at a playground. (It was a toy Airsoft gun.) Surveillance video of the shooting has been made public. Police are now investigating the incident, with evidence to be sent to a grand jury. The family has filed a civil lawsuit against Cleveland Police, hoping to get the two officers indicted and convicted without a grand jury.

This is the most recent event that has refueled anti-police violence demonstrators as it took place November 22nd of this year.

A Staten Island father of six, Eric Garner died on July 17, 2014, by a fatal NYPD officer chokehold. He was approached by police for allegedly illegally selling cigarettes on the sidewalk. Garner’s death was recorded on video and posted to YouTube, garnering hudreds of thousands of views and reaction from across the nation. A grand jury declined to indict the police officer for using the banned policing tactic, sparking further unrest across the U.S.

The August 9 police shooting of black unarmed black teen Michael Brown started a wave of demonstrations across America. While there is a longer history of controversial police shootings and tactics in the community, Ferguson officer Darren Wilson’s confrontation with Brown brought many questions and anger into the streets of Ferguson, Mo. A grand jury decided on not indicting Wilson, causing the community to erupt in protest and destruction.

When have you ever heard of a black cop gunning down a white 18yr old who was willing to die over cigars like #MikeBrown? I'll wait….

As protests began in Ferguson, many across the world were awestruck by the aftermath following Michael Brown’s death. The built-up police departments in the St. Louis area brought light to America’s underreported militarization of police.

The hashtag often represents a larger group referring to all things related to the #MikeBrown case, and has become a catchall phrase for the opposition of aggressive policing.

#shawshooting refers to an off-duty police officer shooting of young teen Vonderrit Myers in St. Louis, which occurred two months after Michael Brown’s death and just 12 miles away from Ferguson. Protesters claim it was aggressive and discriminatory policing, with area witnesses saying the officer shot Myers 16 times. Police say Myers was armed, while area protesters claim he was just carrying a sandwich.

Ferguson protest organizers often have demonstrations gather at the scene of the #shawshooting. And protesters share the #16times or #16shots to emphasize the use of force by U.S. police.

#ShawShooting #16times #MikeBrown #FergusonOctober Shot 16 times for holding a 'Sandwich'!! What is wrong with the Police??

The trending hashtag refers to Eric Garner’s repeated calls that he could not breathe while a Staten Island NYPD officer, Daniel Pantaleo, performed a fatal chokehold in July of this year. The officer justified the chokehold because he said Garner was resisting arrest.

“I can’t breathe,” and “we can’t breathe” are chants heard at almost all Eric Garner protests. The #ICantBreathe hashtag is now often used to represent the overall fight for justice against police use of force.

In reference to a video showing Eric Garner’s body lying on the ground for seven minutes after a NYPD officer chokehold resulted in his death. The video shows several police officers milling around.

Many cities and towns across the world will create their own localized hashtags to show their solidarity with those in Ferguson fighting for justice for Michael Brown. It is also a way to call for protests in their area or as a way to group photos and reports all under one hashtag.

The activists calling for independence in Palestine showed their support for Ferguson with information on how to overcome police brutality and tear gas, in the aftermath of police response to the protests following Brown’s death. The Ferguson movement has had an international reach that went into Gaza and the West Bank.

In an attempt to disturb the status quo and bring attention to the recent police shooting cases, “shutting it down” is a non-violent civil disobedience action many are using across America to call for justice. As they say, “If we don’t get justice… shut it down.”

This hashtag refers to a separate grassroots campaign to support those demonstrators in Ferguson, who have been on the streets day after day, by feeding them. This one was most active in the first month or so after Michael Brown’s death in August.

Responding to the media’s controversial coverage of shooting victims by police, African-Americans shared photos of themselves that they believed the media would use to make them look like criminals. These ostensibly incriminating photos were shared along side photos that portrayed them in a positive light (such as in graduation garb or business attire), or that they felt was more representative of themselves.

#blacklivesmatter is used by many online—and at IRL protests—to say that blacks have a right to live. After Eric Garner, Michael Brown, Tamir Rice, and others, the black community online has used this hashtag to help grow a conversation over issues facing the community, including racism, profiling, discrimination, and police violence.

We need to keep saying it so it transcends politics and partisanship: #BlackLivesMatter

Using the hashtag #alivewhileblack, black people posted stories of how they faced discrimination by police in their everyday lives simply because of their race.

Patted down by #Detroit PD after mkng an illegal left turn as a teen. "Not used to this, huh? Well, better GET used to it." #AliveWhileBlack

In another attempt to highlight the relationship between race and police aggression, white people took to social networks to share experiences where they claim they were let off easy—or let go entirely—for committing a criminal act just because they were white or “looked respectable,” hashtagging it with #crimingwhilewhite.

#CrimingWhileWhite is not meant to take the spotlight from the black struggle. It's to show other white people that #WhitePrivilege is real.

Started by the NYPD Chief Joanne Jaffe, this hashtag turned into a slew of anger on Twitter. The seemingly innocuous tweet—“The NYPD is committed to rebuilding public trust” with the #wehearyou tag—immediately prompted citizens from around the world to offer some biting rebuttals.

Common mottos used to inspire hope among those who have issues with American policing tactics, “this ends today” or “this stops today,” has been used regularly in the wake of grand jury decisions regarding the deaths of Brown and Garner.

Intense in NYC. People are mad, which is good, and loud, which is better. #icantbreathe #ThisEndsToday

I march the streets of New York City in the cold and rain because "my liberation is bound up with yours!" #EricGarner #ThisStopsToday

Often chanted at demonstrations with livestreamers, #worldiswatching was pushed by protest organizers to be shared on Human Rights Day, which was this past Wednesday, December 10. They wanted Ferguson supporters to jump on an international hashtag to bring U.S. abuses into a bigger spotlight.

Today is Human Rights Day. Show solidarity by sharing an image of state violence in your city/country with #WorldisWatching

A weekend of organized and non-violent civil disobedience was performed in Ferguson this October called “Ferguson October.” It also included a day of protest similar to the North Carolina political #MoralMonday movement.

Ferguson protest organizers alerted all national participants to share a photo of their Thanksgiving dinner table this year with an empty seat meant to show solidarity and memorialization for those lost by police use of excessive force.

Ferguson protesters aimed at corporate America on Black Friday to try to disrupt the shopping holiday. The protest event was to also bring attention to the “no indictment” grand jury decision in the Michael Brown case that came out earlier in the same week.

They said #NotOneDime should be spent if situations like the shooting and aftermath in Ferguson upsets people. Some called it #BlackoutBlackFriday or dedicated it after Michael Brown by calling it #BrownFriday.

Gathering outside Barclay’s Center in Brooklyn, Eric Garner protesters continued to call for justice on Monday, December 8. The basketball game held at the Center was a high-security event, with Prince William and Duchess of Cambridge Kate Middleton in attendance. Demonstrators tried to shut it down, but were limited to taking to the streets and blocking commuter entry into the Barclays transit hub.

This hashtag is used for the National March Against Police Violence scheduled for this Saturday, December 13, in Washington, D.C. The demonstration’s organizers aim to also make Internet waves with the #Justice4All hashtag.

https://t.co/UZnavA7tqW is back up! Check now for info on buses in your area & more details on #Justice4All March pic.twitter.com/zblyzOJrkk

To go along with the march in the nation’s capital this Saturday, New York City is holding a #MillionsMarchNYC the same day, as the city’s demonstrations against police violence continues in the wake of the non-indictment of the man responsible for Garner’s death.