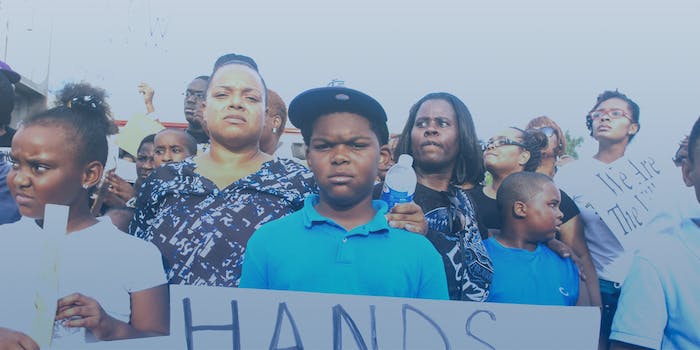 A 'searing' report on the justice system.

Racism against African-Americans and a “widespread pattern of violations of the U.S.  Constitution and federal law” is deeply embedded within the Ferguson, Mo. justice system, United States Attorney General Eric Holder said in a speech on Wednesday. His comments follow a seven-month Justice Department investigation into the 2014 killing of Michael Brown.

“Local authorities approached law enforcement not as a means to protect public safety but as a way to generate revenue.”

“Some of those protesters were right,” Holder asserted.

“Violence is never justified, but seeing in this context of a highly toxic environment, it’s not difficult to imagine how a single tragic incident set off the citizens of Ferguson like a powder keg,” Holder said. “Citizens weren’t responding to a single incident” but to broader abuses.

Holder added that Ferguson is a “community that is deeply polarized, characterized by deep distrust and hostility between citizens and law enforcement. Local authorities approached law enforcement not as a means to protect public safety but as a way to generate revenue with policing disproportionately harmful to African-Americans that stems at least in part from racial bias.”

On Wednesday, the Justice Department released what Holder described as a “searing report,” spanning more than 190 pages, which outlines both the investigation into 18-year-old Michael Brown’s death and the culture of racism and abuse that saturates law enforcement both in the region and, to varying extents, around the United States.

Ferguson police officer Darren Wilson will not be prosecuted by the DOJ for killing Brown, but the Ferguson Police Department will be forced to fundamentally change the way they work in virtually every way.

The report is about the “causes of misunderstanding and trust between law enforcement and communities they serve.”

“To all those involved in the important national dialogue, I urge you to read this report in full,” Holder said.

You can find the reports below.

The key words from Holder: No other explanation for Ferguson police practices with black residents than "implicit and explicit racial bias."

“People feel under assault and under siege by those charged to serve and protect them,” Holder said. He went on to describe abuses “at nearly every level of the Ferguson Police Department” including “First Amendment abuses, unreasonable searches and seizures, executive and dangerous uses of force, and disproportionate abuse against African-Americans.”

In one incident highlighted by Holder, a 32-year-old black man was approached because the car he was sitting in appeared to have windows tinted beyond local laws. With no apparent justification, DOJ investigators found, the officer proceeded to accuse the man of being a pedophile, then got the man out of the car and gave him a pat down search for no apparent reason. When the man objected, citing his constitutional rights, the police officer pointed his service weapon at the man’s head and arrested him on eight counts. As a result, the man lost his job.

This kind of abuse, , Holder said, is par for the course.

The Justice Department also found that Ferguson police often served more to generate revenue for the city than as a means to protect the public. Investigators identified a recent 50-percent increase in citations despite no increase in crime in the city. The city courts collected $1.3 million in fines and fees, double the number from just five years prior.

“The city relies on the police force to serve as collection agency for the municipal court.”

“Significant pressure is brought to bear to deliver on these revenue increases,” Holder explained. “The system is primed for maximizing revenue and the city relies on the police force to serve as collection agency for the municipal court.”

Cops are disciplined if they don’t meet ticket quotas “regardless of public safety needs,” the report found. As a result, officers pile on charges during routine stops; three or four charges for one stop is normal, according to the DOJ.

“Officers compete to see who can issue largest number of charges on a single stop,” Holder said. “Fourteen charges came from a single such stop once, and this can result in jail time and huge fines.”

Holder described one saga in which a woman was received two parking tickets totaling $152 in 2007. To date, she’s paid $552 in fines and fees, she’s been arrested twice for unpaid tickets, spent six days in jail, and “today she inexplicably owes $541 to the city of Ferguson.”

It’s a “disturbing and unconstitutional practice,” Holder said, involving routine violation of citizens’ constitutional rights. Arrests violating the First and Fourth Amendments were particularly common, Holder said, as the investigation into the police’s own records uncovered that probable cause was often abandoned, unreasonable force embraced, and arrest decisions often made “based on how citizens express themselves.”

“It’s common practice to stop pedestrians and request ID for no reason at all,” Holder said. “Even in encounters where stops begin as constitutionally defensible, they often rapidly escalate.”

Holder, whose brother is a retired cop, says behavior like this endangers not just the Ferguson community but also officers and communities around the country by exacerbating tension and stifling citizen confidence in law enforcement.

Holder’s report concluded that the Justice Department will take legal action  against Ferguson Police should the department fail to implement changes to the DOJ’s satisfaction.

“These concerns are particularly acute in Ferguson, but they’re not confined,” Holder said. “The questions about fairness and trust are truly national in scope.”

Photo via Wikimedia (CC BY 2.0) | Remix by Max Fleishman