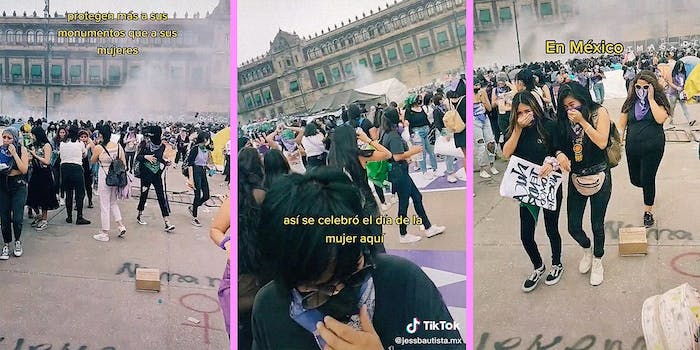 A TikTok video shows police deploying tear gas on women protesting femicide committed by Mexican drug cartels. The protests in Mexico City coincided with International Women’s Day, with women coming out in force to call for the end of gender-based violence.

The TikTok footage was posted by @jessbautista.mx and shows women running away from the growing tear gas plumes.

Scenes from the protests trended on social media. Femicide, the systemic killing of women, is recognized by the World Health Organization.

Before Monday’s protest, police barricaded President Andrés Manuel López Obrador’s presidential palace. According to a Washington Post report, the Mexican president “has long had tense relationships with feminist movements, [and] stoked the anger of many women for his support of a gubernatorial candidate accused of sexual assault, alongside continuing high cases of gender-based violence.”

Félix Salgado Macedonio is running for governor in southern Guerrero state, “despite accusations of sexual violence and rape by five women dating back as far as 1998,” reports The Guardian.

Per NBC News, in 2020, “at least 939 women were victims of femicide,” according to government statistics. According to another Post report, Mexico “recorded more than 1,000 deaths classified as femicides [in 2019], part of a historic high of 35,588 killings.”

@camiinelrapids posted a detailed thread about the protests and femicides in Mexico.