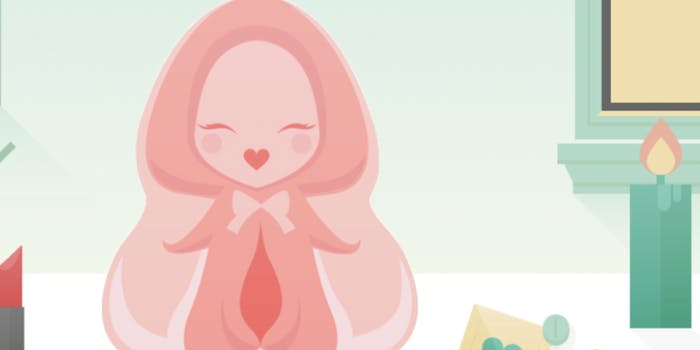 Is Happy PlayTime “pornographic,” or is Apple just uncomfortable with its quirky treatment of female sexuality?

There are many apps on the iTunes Store that could be considered offensive. There’s NRA: Practice Range, a shooting simulation game that was released by the organization less than a month after Sandy Hook. There’s Asian Girls, an app that brings you as many photos of young Asian women as your little race-fetishizing heart desires. And there’s Am I Fat?, a charmingly named app that calculates your BMI to tell you whether you’re svelte and sexy or overweight and hideous.

But none of these apps is worthy of a ban from the App Store. What is? A game called Happy PlayTime, in which a little anthropomorphized cartoon vulva teaches women how to be comfortable with their own bodies. Earlier this week, Apple rejected the app without much explanation.

Coincidentally, a quick App Store search for “fap” turns up a “Shake Weight trainer” called Wrists of Steel (right). The challenge: See how many “strokes” you can get in 10 seconds. 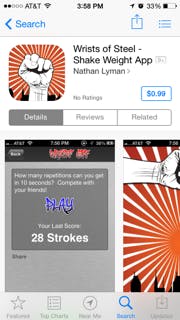 Happy PlayTime is a six-level interactive game where a cartoon vulva named Happy—who, frankly, looks less like an actual vagina, and more like a Kewpie Doll in a pink backpack—instructs users on basic anatomy and how to stimulate their clitorises. The design is not explicit in any way, and it’s intended to be educational rather than titillating, but apparently Apple felt otherwise. A representative for the App Store told Gong that the concept of the game “was not something that Apple wants to go forward with.”

In her blog post, Gong says she considered creating a petition to get Happy PlayTime onto the store, but ultimately decided against it, on the grounds that it would be “a waste of energy to argue with them.” Instead, she’s focusing on developing a Web-based browser version of the game.

But given how many other sexually explicit (and arguably morally objectionable) apps are currently on the iTunes Store, it seems unfair that Gong should have to find another home for her little cartoon vulva. For one thing, it doesn’t seem like Happy PlayTime actually violates Apple’s terms and guidelines, which explicitly prohibit “apps containing pornographic material.”

Gong clearly thinks it’s useless to make a big stink about Happy PlayTime being rejected from the Apple Store, and truth be told she’s probably right. But in this ostensibly sex-positive and liberated era, it’s pretty sad that one of the biggest companies in the world can’t get on board with the idea of female self-pleasure, even when it’s represented by something as adorable and harmless as a little pink Kewpie doll in a backpack.