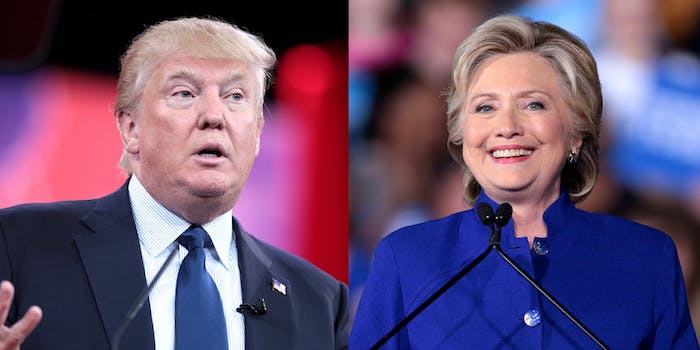 The FBI said there was no evidence China hacked Clinton's emails.

The FBI pushed back yesterday night after President Donald Trump claimed on Twitter earlier in the week that China had hacked Hillary Clinton‘s email server while she served as Secretary of State.

The agency said there was no evidence to the claims made by the president in a statement to NBC News.

“The FBI has not found any evidence the (Clinton) servers were compromised,” an agency official told the news outlet.

The official also referenced a Justice Department Inspector General report that said it was “possible” Clinton’s email server was accessed, but there was no evidence the server had been compromised.

As the news outlet points out, an FBI forensics agent said he was “fairly confident” there was not any intrusion on Clinton’s servers.

Late Tuesday, Trump tweeted about China hacking Clinton’s email server, adding that the FBI and Department of Justice needed to investigate it or risk having their credibility “be forever gone.”

The president said the issue was a “very big story.”

Hillary Clinton’s Emails, many of which are Classified Information, got hacked by China. Next move better be by the FBI & DOJ or, after all of their other missteps (Comey, McCabe, Strzok, Page, Ohr, FISA, Dirty Dossier etc.), their credibility will be forever gone!

The president’s tweets came after the Daily Caller, a conservative website, published a story where sources told them Clinton’s emails were read by a Chinese-owned company by using a code.

The story said the former secretary of state’s emails could be read in real time.

Fox News host Laura Ingraham also spoke about the story on Tuesday night, and it is getting pushed around conservative media.