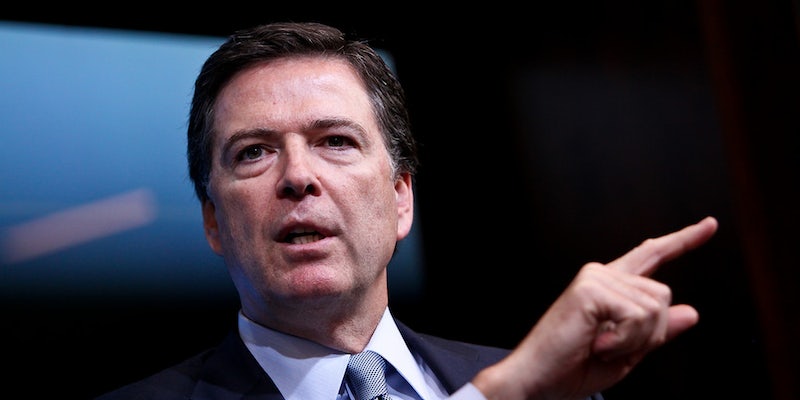 The FBI is taking your retweets very, very seriously

Common Twitter etiquette stipulates that retweets do not constitute endorsements, but the FBI doesn’t agree.

FBI director James Comey told the Huffington Post that the agency could consider a retweet a criminal act, depending on the defendant’s mental state and the content of the tweet.

“It would depend on what your mental state is in doing it,” Comey said of retweeting. “I can imagine an academic sharing something with someone as part of research would have a very different mental intent than someone who is sharing that in order to try and get others to join an organization or engage in an act of violence. So it’s hard to answer in the abstract like that.”

The agency has used tweets and retweets in several recent terrorism prosecutions. In April, the FBI cited several of a Philadelphia woman’s pro-Islamic State tweets in its criminal complaint against her. In June, a Virginia teen pleaded guilty to tweeting instructions on how to donate to ISIS using Bitcoin.

Comey has often focused on Twitter as a recruitment tool for ISIS. He recently complained to the Senate Judiciary Committee that social media made terrorist recruitment easier than ever, claiming that propaganda buzzed in the pockets of potential recruits.

However, Comey did say that there is a “bulwark against prosecuting someone for having an idea or having an interest,” which would violate a person’s free speech rights. “We’re required to prove you knew what you were doing, you knew it was wrong, and you did it anyway,” Comey explained.

Still, the American Civil Liberties Union expressed concern that the FBI’s approach to retweets might be too restrictive. Lee Rowland, an attorney at the ACLU’s Speech, Privacy & Technology Project told the Huffington Post, “If someone is being charged with a crime simply for retweeting the content of a terrorist group, that would violate the First Amendment, full stop.”

“A RT alone is certainly not an endorsement and in many situations may be a criticism of the original speaker, and that’s particularly true with terrorism, because I believe many people may believe terrorism is self-evidently immoral,” Rowland added.

H/T the Huffington Post | Photo via BrookingsInst/Flickr (CC BY-2.0)