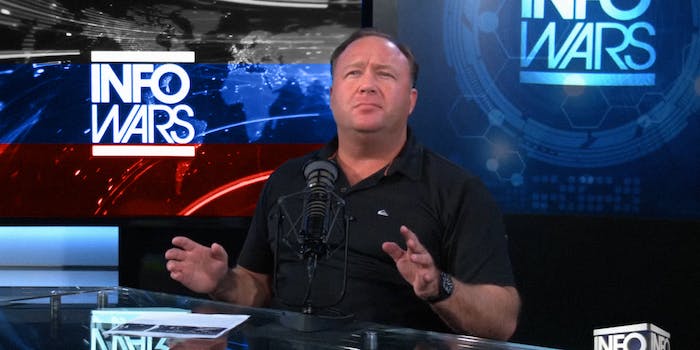 Screengrab via The Alex Jones Channel/YouTube Remix by Jason Reed

Federal investigators are reportedly looking into the connection between a Russian government-controlled botnet and conservative American news sites known for their favorable coverage of President Donald Trump.

According to two anonymous sources who spoke with McClatchy DC, the FBI is examining whether employees of Breitbart and InfoWars were in contact with the Russian operatives who controlled online “bots”—automated computer code—that pushed pro-Trump stories on Facebook and Twitter anytime the then-GOP presidential candidate was having a tough day. Russian propaganda outlets RT News and Sputnik are also reportedly part of the inquiry.

These influence campaigns included, according to a joint report from the Office of the Director of National Intelligence, pro-Trump botnets that spread positive stories about the Republican candidate and, perhaps most famously, the theft of emails from the Democratic National Committee (DNC) and Clinton campaign chair John Podesta that were later published by WikiLeaks.

FBI Director James Comey confirmed during testimony before the House Intelligence Committee on Monday that the bureau is currently investigating Russia’s attempts to meddle in the 2016 presidential election, including potential cooperation between the Trump campaign and Moscow.

Both Breitbart and InfoWars have connections to Trump. White House chief strategist Steve Bannon resigned as executive chairman of Breitbart News to help run the Trump campaign. Alex Jones, operator of InfoWars and a popular radio host known for his embrace of wild conspiracy theories, is further outside the Trump bubble but interviewed the candidate during the 2016 election. Jones also regularly produced glowing coverage of Trump ahead of Election Day.

Even with a report of an FBI inquiry, there is currently no known evidence that either Breitbart or InfoWars coordinated with the Russian botnet operatives. Neither publication could be reached for comment.