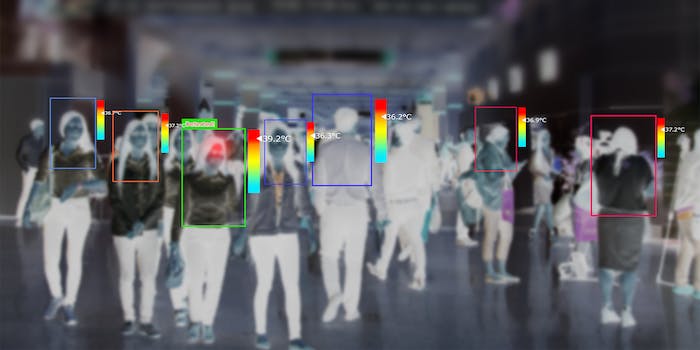 Why facial recognition thermometers are raising privacy concerns during the pandemic

Privacy concerns have been raised as the tools have become more common during the pandemic.

Thermal imaging thermometers are popping up all over the country as a method of trying to mitigate COVID-19, but data and privacy concerns have been raised as some of the devices scan individual’s faces to check their temperature.

Restaurants, hotels, and office buildings are implementing what are essentially facial recognition thermometers. The Food and Drug Administration (FDA) published several recommendations for the use of telethermographic devices in April. The guidelines state that the systems alone cannot prevent the spread of COVID-19.

The new technology looks like a tablet connected to a stand that scans a person’s temperature from the shoulders up. The front facing camera shows individuals where to stand and look. The device then locates the correct area on the body to check temperature as it varies throughout the human body.

But, some devices—like ones that were used in schools, according to Wired—also come with facial recognition technology. The facial recognition feature in the temperature checkers are also being used by employers. As the Washington Post noted earlier in the pandemic, the combined facial-recognition and temperature taking devices started becoming prevalent in work places early on.

Some of these devices sell for around $1,000 on Amazon. Features include no-contact temperature detection, facial recognition (even with masks on), and storage for face identification memory. So, business owners or apartment landlords who place these devices have the ability to save the biometric data of those who use these devices.

Given the privacy concerns that have been raised with facial recognition technology as a whole, experts have raised alarms about its use during the coronavirus pandemic.

Cahn says the devices present more problems than they solve.

“We just don’t know how much data they are collecting or where that data is stored and what the risks of bias and other potential errors might be,” Cahn said.

Many studies on facial recognition have shown that these systems are more likely to fail when used on individuals of color.

That means these targeted demographics are more likely to be “falsely labeled as having a fever, subjected to medical analysis, barred from entering facilities and really shut out from aspects of life. Not because they are sick, but because the technology will be wrong more often for them,” Cahn said.

As of right now, the FDA is allowing telethermographic technologies. The agency released some research it has done that confirms that the machines may have temperature measuring capabilities

“When used correctly, thermal imaging systems generally have been shown to accurately measure someone’s surface skin temperature without being physically close to the person being evaluated,” the FDA reported.

In theory these systems should help stop the spread, but a high fever is only one potential symptom of the virus. However, the FDA acknowledges that the systems are not the end all be all of COVID-19 tracing.

“Temperature-based screening, such as thermal imaging, is not effective at determining if someone definitively has COVID-19 because, among other things, a person with COVID-19 may not have a fever,” the FDA wrote on their website.

The site also listed recommendations for how the systems should be implemented.

First, the systems should not be used in areas with high volumes of people.

“In airports, workplaces, grocery stores, concert venues, or other areas where you are trying to screen large groups of people for mass fever screening, diagnostic testing may be too difficult because of the time and costs needed to screen and get results,” the FDA states. “These systems will likely miss most individuals with COVID-19 who are contagious.”

So, why are thermal imaging systems being used?

Cahn said he believes the influx of new thermometers and other illness prevention technologies were likely catalyzed by fear of the pandemic.

“It’s public health theater just like we’ve seen security health theater for years following 9/11 with people investing millions into unproven and invasive technologies that make the public feel as if they are being protected despite a lack of evidence that they were,” he said.

Instead, Cahn says he finds public health authorities are still emphasizing the lowest tech solutions like social distancing, masks, and hand washing as the best way to stop the spread.