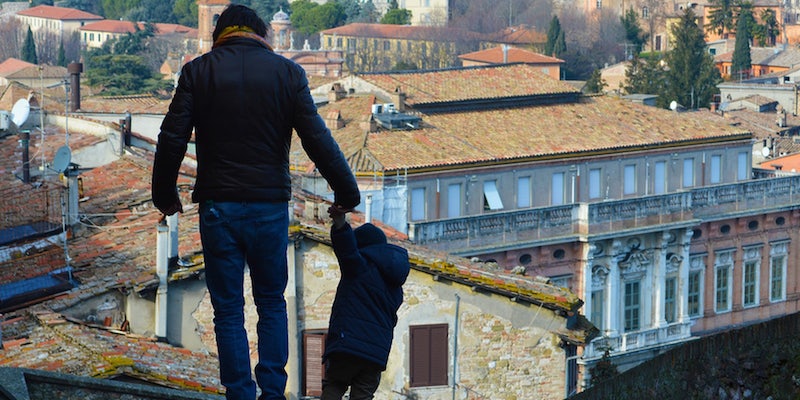 Not everyone wants to look back.

If you’ve scrolled through your Facebook feed in the past few days, you’ve no doubt seen a post encouraging you to check out your “Year in Review,” the social network’s algorithmically-generated look back on your year in status updates, photos, and videos. 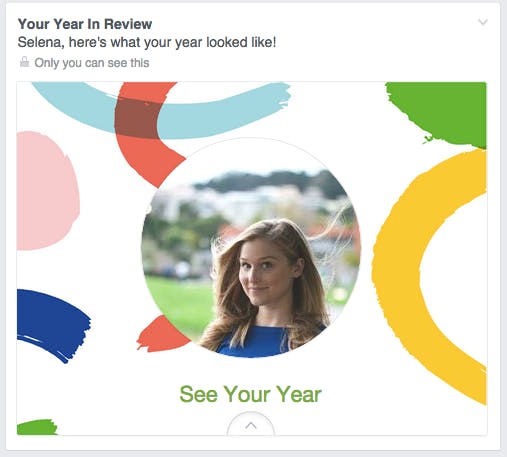 The year-in-review slideshow contains the moments and media you’ve shared with Facebook—mine were mostly selfies and photos of cocktails with friends—but because it chronicles everything, regardless of a user’s feelings about certain content, it may have the opposite of its intended effect.

For some users, reminiscing with an automatically generated social timeline falls somewhere between awkward and downright unpleasant.

Eric Meyer, a Web developer and author, was among many Facebook users to face a painful memory when he first noticed the year-in-review feature. Meyer’s daughter Rebecca passed away in June after a battle with cancer, and for its box touting Meyer’s Year In Review, Facebook decided to show him a photo of his daughter, framed by colorful illustrations of men and women dancing in celebration.

[F]or those of us who lived through the death of loved ones, or spent extended time in the hospital, or were hit by divorce or losing a job or any one of a hundred crises, we might not want another look at this past year.

To show me Rebecca’s face and say “Here’s what your year looked like!” is jarring. It feels wrong, and coming from an actual person, it would be wrong. Coming from code, it’s just unfortunate. These are hard, hard problems. It isn’t easy to programmatically figure out if a picture has a ton of Likes because it’s hilarious, astounding, or heartbreaking.

There are no humans creating these slideshows. There is only an algorithm—granted, one built by a human—that collects posts with the most Likes and shares, and photos of you with your frequently-tagged friends.

Facebook’s algorithm doesn’t understand what makes one photo more popular than another. More importantly, it can’t understand why, even if a photo really is your year in a nutshell, it’s inappropriate to present that photo among colorful, dancing shapes.

An algorithm doesn’t understand that you might not want to look back on your year at all.

Some people share everything with Facebook. If much of that content over the course of a given year is negative or painful to recall, it can feel insulting to see Facebook place the 2014 retrospective feature at the top of its feed. By encouraging us to click regardless of the content, Facebook ignores the fact that many people haven’t exactly had a year worth celebrating.

Machines aren’t yet advanced enough to understand human emotion, and the people creating the machines don’t always recognize how their technology could negatively impact people. Facebook assumes that its Year in Review will make everyone happy, much the same way that creators of anonymous software either can’t or don’t attempt to predict the foul ways in which people will use their apps.

Facebook’s problems in this area didn’t start with the Year In Review. It just can’t seem to get its nostalgia-generators right. In November, the company rolled out “Say Thanks” videos that, for many people, were the emotional equivalent of a punch to the gut. It suggested I create a thank-you video for old friends and family members I hadn’t talked to since 2013. It also created a video of our time together, showing photos accompanied by instrumental music. The combination brought tears to my eyes.

The Year in Review is a little bit tamer, suggesting that Facebook is trying to be more careful about rolling out features that force people to reminisce about their lives. There’s no video accompanying the photographic timeline; rather, it’s simply a collection of your posts on the site.

The Year in Review post follows you from desktop to mobile, encouraging you to share your personal highlight reel. You can hide it from your News Feed, but as Meyer points out, few people realize that you can click the light grey arrow to make it go away.

My News Feed was filled with Year in Review posts from friends, all of whom appreciated Facebook’s feature. For them, it was similar to sending out family Christmas cards: “Hey, look how fun our year was!” Facebook should offer the feature for people like my friends, but it should have made it opt-in, rather than splashing it prominently on the News Feed like an intrusive advertisement prompting you to relive your own life.

Social algorithms may never understand the intricacies of human emotion; they certainly don’t get it yet. But the people building those algorithms have a responsibility to pick up where their unsympathetic code leaves off.