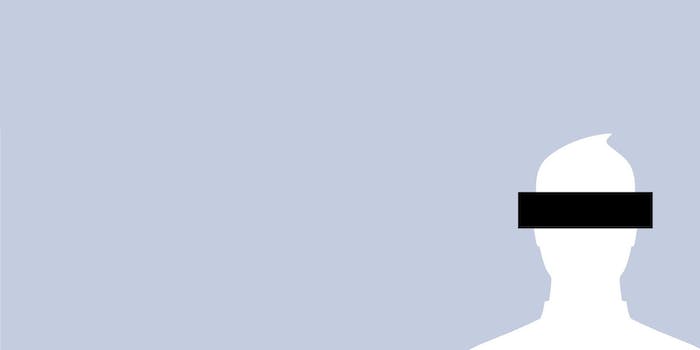 Facebook is considering jumping on board the anonymous apps train

Facebook has become what it is by leveraging your real name and identity, or at least the closest thing on the Internet to that. It’s the reason that so many websites let you login with your Facebook account, and why so many apps that rely on any real world interactions do the same.

The Internet has always made it easy for you to be anonymous, and Facebook was arguably the first network that was able to capitalize on the value of tying the you sitting behind a keyboard to the you walking around in the world.

According to Recode, Facebook is interested in becoming a part of the “secret” trend. Apps like Whisper, Secret, and their small but growing cadre have generated too much interest to ignore. Per Recode’s report:

The social networking giant has expressed interest in exploring how it can develop anonymity services. Secret, one of the latest buzzy social apps, has met with Facebook to discuss how the two companies can work together, according to people familiar with the matter … Rumors of a $100 million offer from Facebook to buy Secret that reverberated through Silicon Valley this week were shot down by two people familiar with the social networking giant’s plans.

But just because a Secret acquisition didn’t happen doesn’t mean Facebook won’t buy its way into this genre. There are a variety of smaller services out there that do the same thing (more or less) that could be easier to snatch up: YikYak, Confide, and Wut are just a few examples.

It’s another indication that Facebook, once the trendsetter, is now on the other side of things. Of course the difference is it has billions of dollars it can invest in trying to be a part of those things (even if those things might only temporarily hold our interest).

Still, it’s a confusing idea: The company that has made its reputation off of creating and supplying others with our reputations is interested in offering us a slice of anonymity. It’s completely antithetical to Facebook’s purpose… but when has that ever stopped a multibillion company from pursuing an opportunity?