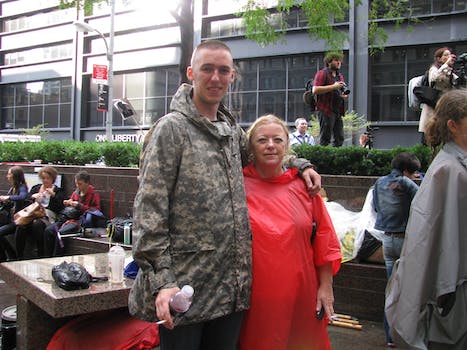 Much like the uprising in the Middle East, social media is helping organize and support the Occupy Wall Street demonstration.

Charles, who like many protesters at the scene wanted to only give a first name, is a 22-year-old Army veteran from Seymour, Indiana. He first heard about OWS from a post by Anon Press, a Facebook feed of updates related to Anonymous. He showed news of the protest to his mom. “We need to go do this,” she told him. Soon, they were on an Amtrak train, and 22 hours later, they had joined the movement.

Aron Kay, known in some corners of the Internet as the Mad Yippie Pie Man, has been participating in political demonstrations since the Vietnam War. “I was doing this same stuff back in ‘66-67,” he said. “But this one I found out about, a little bit, from the Internet, from my friends on Facebook.”

A 52-year-old woman, who requested her name not be used for fear it could harm her employment prospects, traveled from Florida to protest in New York, where she lived for 37 years. “I’m a liberal, and I’m on Facebook,” she said. “I don’t really remember how I heard about this, but when you join liberal groups, you just sort of know about this sort of activity.”

Once they arrive on Wall Street, OWS protesters don’t follow a strict governance code. There is some organization, however, and enough people are happy to help. Those who wish to volunteer have split into groups, each serving a single purpose: comfort, food, medical, and media.

“Social networking has been key to organizing everything,” said Mike, who volunteers in supply. “We have a horizontal structure here, where anyone can have a voice or a say. It makes this not just an isolated event. We have support and packages coming from Maine, California, Colorado, from all over.”

Donated supplies to demonstrators started small but have grown exponentially. The first meal shared en masse was on OWS’s inauguration, Sept. 18. It consisted entirely of peanut butter sandwiches–bread someone salvaged from dumpster diving and a tub of peanut butter someone had dropped off, recalls food group volunteer Amy Hamburger.

Followers out of town flocked to their phones, and they quickly announced on Twitter that they had placed an order for demonstrators from places as far away as Los Angeles and Hawaii. Liberato’s Pizza, a vegan-friendly pizza joint about six blocks away, had become the token pizza supplier of Occupy Wall Street, and the orders have steadily increased since that first day.

“Support was amazing,” Hamburger said. “We now get like 50 pizzas per meal, ordered from all over the world.”

From there, the hashtag #needsoftheoccupiers quickly grew in popularity. It didn’t need to come from @OccupyWallStNYC, either. Anyone who saw a need could simply tweet it with that hashtag, and odds were, someone would find a way to ship it.

“We get packages every day from people who can’t be here, who just watch the live feed at home,” said Steve, who volunteers in the medical group and is one of the few people in Liberty Square to still wear a Guy Fawkes mask on top of his head. (More people wore the masks in the protest’s first few days, he said, but the police were more likely to single those people out.)

OWS is now inspiring similar groups in cities such as Chicago and Los Angeles. Thanks to support from communities on Facebook and Twitter, those protesters, especially the ones in New York, won’t be leaving for a lunch break anytime soon.

“We had over a hundred packages,” Mike said of a shipment that arrived on Wednesday. “They’re sending food, clothing, soap, some nicer things, like razor kits so we can take care of ourselves.”