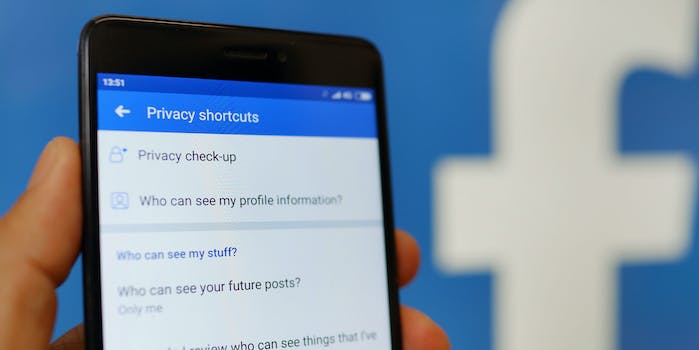 It's much better at predicting your interests when it tracks you.

It’s no secret Facebook tracks everything you do online, but its privacy policies have been scrutinized in the wake of reports that political data firm Cambridge Analytica exploited the personal information of 50 million users. The ongoing incident has awakened fear about how much data the social network collects on its users.

The primary reason Facebook needs so much information about you is to maximize revenue by more accurately targeting ads. Facebook collects data based on your browsing habits and comes to conclusions about what you’re interested in.

To its credit, Facebook lets users turn ad targeting off, but what actually happens when you do?

To determine what happens when you blindfold Facebook, fellow Daily Dot tech writer Christina Bonnington and I turned off our ad settings and documented the type of promotions that popped up. What we discovered confirms how capable Facebook’s algorithms are in determining what you desire.

Before we move forward, we should note that it doesn’t seem possible to erase your digital footprint back to square one. When Facebook isn’t using your past interests or data from other sites you visit, it still knows what you’ve liked, commented, or followed. With that in mind, here are the ads Facebook came up with when we told it to stop tracking us.

Let’s start by looking at the ads Facebook suggested when all our ad settings are turned on. That means the site wasn’t only using internal information it gathered from our interactions with other users and posts, but also serving us ads based on external websites we visited. For example, if I was looking to book a hotel on Expedia, Facebook might serve me ads from one of its clients in the travel industry.

I have to admit, I don’t use Facebook very often, but that doesn’t seem to have stopped it from collecting a good deal of information about me. As anyone might have guessed, most of the ads Facebook showed me were tech-related. Additionally, many of them correlated with an article I had recently written. That’s likely based on sites I visited when researching that piece, but it’s creepy nonetheless.

Take this ad for a managed service provider, or a company that remotely manages a company’s IT infrastructure. The product is pegged as a solution that doesn’t require a virtual private network (VPN). Ironically, I came across the ad not long after writing an article about why you shouldn’t use Facebook’s VPN service.

Another ad sitting in my News Feed was for Republic Wireless, a virtual network operator. Lo and behold, a few weeks before I came across it, I had written a comprehensive guide on Project Fi, Google’s rival mobile network.

Once it was clear that Facebook’s algorithms were churning away, we turned off ad settings. This meant selecting “settings” from our profile page then “ads.” From there, we deselecting all three ad settings: ads based on your use of websites and apps, ads on apps and websites off of the Facebook Companies, and ads with your social actions.

Once this was done, our ad results changed significantly, becoming much less specific and personalized.

I can confidently admit that the 24 Hour Fitness advertisement I was shown is way off-base.

Without as much data to go on, Facebook brilliantly cheats the system by displaying ads for things nobody can resist, like pizza and coffee.

Christina was similarly shown ads that didn’t align with her interests, including vague promotions on business management, marketing, and entrepreneurship. She did note that many of them contained a sports angle, perhaps because of the cycling pages she’d previously liked.

Our findings prove how capable Facebook is at serving up relatable ads, and how important it is to the company that it gathers data about your browsing habits both internally and on other sites. Without that information, its suggestions aren’t nearly as personal.

There are some obvious pros and cons to altering your ad settings. Keeping them on means Facebook will track what you do online so it can determine what you’re interested in. That might turn some people off considering the scandal the company finds itself in. Turn ads off, and you risk seeing irrelevant content.

Unfortunately, there is no way to reduce the number of ads you see, only their relevance.

If you don’t trust Facebook (which is probably why you’re reading this in the first place), consider downloading the Firefox Quantum browser and using its new add-on, which blocks Facebook tracking.